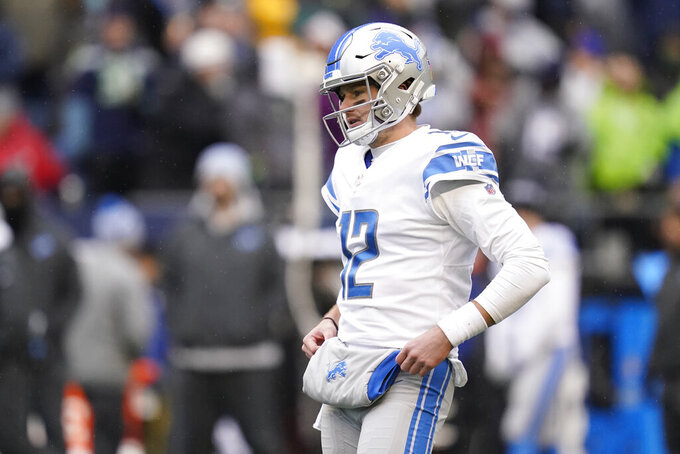 Detroit Lions quarterback Tim Boyle reacts on the field during the first half of an NFL football game against the Seattle Seahawks, Sunday, Jan. 2, 2022, in Seattle. (AP Photo/Elaine Thompson)

Aaron Rodgers knows the Green Bay Packers, who have clinched the NFC's No. 1 seed, can't improve their playoff positioning with a win over the lowly Detroit Lions.

The reigning NFL MVP still wants to play Sunday at Ford Field, even though that would increase his chances of getting injured.

“There’s risk every time you take the field," Rodgers said. “There’s obviously the idea about rust compared to momentum."

The Packers (13-3) are closing the regular season strong with five straight wins, earning home-field advantage in the conference playoffs for the second straight year and winning the NFC North for the third season in a row.

“I have a hard time going into any game saying it doesn’t mean anything," coach Matt LaFleur said. “I think every time you go out there, you’re trying to perform your best. So all our guys that are playing, which is the majority of our team, they’ve got to go in with the mindset that they’re going to play the entire game."

The Lions (2-13-1) are limping toward the end of coach Dan Campbell's first season with injuries and pandemic protocols ravaging their roster.

Jared Goff missed last Sunday's loss at Seattle with a knee injury after being on the reserve/COVID-19 list the previous week when Detroit lost at Atlanta.

Even though the sixth-year quarterback doesn't need to play the Packers, he hopes to be healthy enough to face them.

Green Bay's Davante Adams already has broken his own single-season franchise record with 117 catches and he's closing in on another mark. He has 1,498 yards receiving, putting him perhaps a couple catches away from breaking Jordy Nelson's single-season team record of 1,519 yards receiving that he set in 2014 when Adams was a rookie.

Like Rodgers, the star receiver isn't afraid of getting hurt in a game without stakes for the team.

“Obviously there’s risk, but there’s risk going across the street," Adams said. “So at this point, you can’t run from it. If you're scared, go to church."

Detroit has had a lot go wrong this season, but general manager Brad Holmes clearly made the right call when he drafted USC receiver Amon-Ra St. Brown in the fourth round. St. Brown is the first rookie in league history to have eight-plus catches in five straight games. Randy Moss, Odell Beckham Jr. and St. Brown are the three rookies in NFL history to have 90-plus yards receiving and a touchdown reception in four straight games.

St. Brown has 82 receptions, a franchise record for a rookie and is 15 yards receiving away from breaking Roy Williams’ team record of 817 yards receiving for a first-year player with the Lions.

“Probably every coach and every player rave about him," Boyle said. “He deserves everything that’s coming his way. He puts in the work.

“We just got off the practice field and who was out there catching JUGS for 10 minutes? It’s Amon-Ra St. Brown."

Green Bay has needed to retool its offensive line all season due to a variety of knee injuries that have sidelined David Bakhtiari, Elgton Jenkins, Billy Turner and Josh Myers. Jenkins is out for the season, but the Packers are still holding out hope the others could eventually return.

Even with all those injuries, the line has protected Rodgers well by not allowing a sack the past two games.

The Lions lined up offensively last Sunday at Denver with seven offensive linemen at times and scored out of the formation on a touchdown pass to tackle Taylor Decker, who was a tight end on the play.

“That was by necessity really because we lost our tight ends and had two new tight ends," Campbell said. “When your two tackles are two of your better athletes between O-linemen and tight ends, you’re tempted to want to throw to them."

Tackle Matt Nelson dropped a pass and heard about it from his wife, but he's determined to make the most of any chances to be an NFL tight end, a position he hadn't played since 2013 at Xavier High School in Cedar Rapids, Iowa.

“It’s not a position that’s the most natural to me," he said, “so it’s an opportunity for me to show my variety of skills.”

The Packers have a league-low 10 turnovers this season and have a plus-16 turnover margin that matches Indianapolis for the NFL lead. Meanwhile, the Lions have lost a lot in part because of a minus-7 turnover margin.