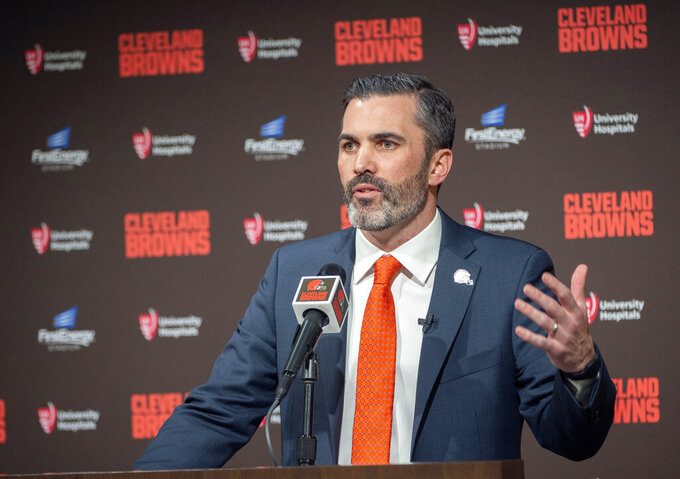 CLEVELAND (AP) — The Browns passed on a chance to hire one of the Patriots' coaches. Now, they'll consider someone who helped build New England into an NFL dynasty.

With Vikings offensive coordinator Kevin Stefanski on board as their new coach, the Browns have accelerated the search for a general manager. They will interview Patriots director of college scouting Monti Ossenfort, a person familiar with the meeting told The Associated Press on Thursday.

Ossenfort, who has been with New England for 15 seasons, will talk with the Browns on Friday. The person spoke on condition of anonymity because the team is not disclosing its plans before interviews take place.

Berry previously worked in Cleveland's front office from 2016-18, and has long been considered one of the league's young, rising executives. He was well liked during his time with the Browns, who went 1-31 in his first two seasons before winning seven games in 2018.

Berry is also a minority candidate. There is currently only one black GM in the NFL, Miami's Chris Grier.

Before hiring Stefanski, the Browns spoke to several candidates, including Patriots offensive coordinator Josh McDaniels, an Ohio native who was the presumed favorite and preferred choice by many Cleveland fans.

Stefanski is helping the team choose its new GM, and his familiarity with Paton could make for a natural fit. The Browns split with GM John Dorsey after this season when he declined a different role. Dorsey had rebuilt Cleveland's roster in his two years in charge of personnel decisions.

Ossenfort has been New England's college scouting director for six years. A former college quarterback, he worked his way up from personnel assistant to area scout, national scout and assistant director of college scouting. He's been with the Patriots since 2003 and in that span the team has won five Super Bowls.

On Tuesday, Haslam said the team would be as deliberate in finding a new GM as it was before hiring Stefanski, one of eight candidates the Browns interviewed.

“We will work through it just like we did the coach process,” he said. "The only difference is, Kevin (Stefanski) will be involved. The search committee will go from four members to five and I do not want to say how long it will take. The important thing is to get it right, so we will focus on that.”

It's still not clear about the future of assistant GM Eliot Wolf or vice president of player personnel Alonzo Highsmith. Both were brought to Cleveland by Dorsey after working with him in Green Bay.

Highsmith could potentially return to the University of Miami, where was a star running back and national champion.

“I think the GM will certainly have some say in his entire football operations staff, but I will tell you that Eliot and Zo, they were very helpful in the head coach search over the last couple of weeks,” DePodesta said. "They are right now grinding away on the draft and even helping out with the assistant coach work. They have been terrific.”

Stefanski is also assembling his coaching staff. He's spent the past two days meeting with coaches who were with Cleveland last season.