Bears remove Smith from PUP list, another twist in standoff 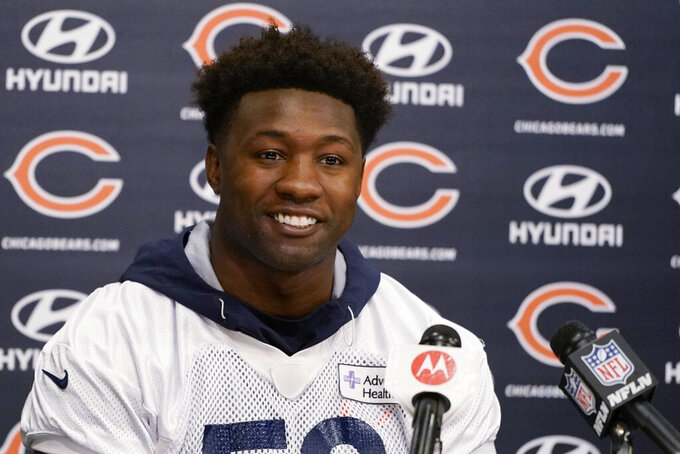 FILE - Chicago Bears linebacker Roquan Smith speaks at a news conference in Lake Firest, Ill., April 20, 2022. Smith is requesting a trade, saying the team has not negotiated in good faith for a contract extension. Smith, who does not have an agent, wrote Tuesday, Aug. 9, 2022 in a statement to NFL.com he has “officially” asked to be dealt and that it was “deeply painful.” He said he has been trying to negotiate an extension since April and accused the organization of trying to take advantage of him. (AP Photo/Nam Y. Huh)

LAKE FOREST, Ill. (AP) — The Chicago Bears' standoff with Roquan Smith took another turn Wednesday when the team removed the star linebacker from the physically unable to perform list a day after he went public with a trade demand.

It was unclear if the Bears took him off the list because of a potential contract extension or trade, or to fine him for missing practices.

Smith has been a “hold-in” since training camp began with negotiations on a new deal apparently at a standstill.

Placing him on the physically unable to perform list allowed him to attend meetings and workouts at Halas Hall without being fined for missing practices.

Smith, who does not have an agent, accused the Bears of not negotiating in good faith in a statement on Tuesday. He said the front office led by new general manager Ryan Poles has made take-it-or-leave-it offers since talks began in April that would be “bad for myself, and for the entire LB market if I signed it.”

Poles said Tuesday he planned to continue working toward a contract extension rather than trade Smith.

“At the end of the day we’ve got to do what’s best for this organization,” he said. "But my intentions are to make sure Roquan Smith’s on this team.”

Poles also insisted his feelings about Smith have not changed.

“I love the kid," he said. "I love what he’s done on the field, which makes me really disappointed with where we’re at right now."

The Bears made big changes after going 6-11 last season and missing the playoffs for the ninth time in 11 years. They fired general manager Ryan Pace and coach Matt Nagy and replaced them with Poles and Matt Eberflus.

The Bears plan to use Smith as a weakside linebacker in their new 4-3 scheme. And his status was front and center at Halas Hall on Wednesday.

Teammates Robert Quinn and Darnell Mooney said they would love to have Smith on the field. But they also understand the business side.

“You see that all the time with players trying to put the heat on the organization just trying to get a deal done,” Mooney said. “It’s nothing that I can do or anything, so I’m just looking from far away.”

Quinn was with the Los Angeles Rams in 2017 when Aaron Donald staged a preseason-long holdout. The All-Pro signed a $135 million, six-year deal just before the 2018 season after holding out again.

“It’s an opportunity to take care of your family and all that good stuff, so you don’t want to sell yourself short because not a lot of people get to sign new contracts, and if you’re one of the best at your position, you want to make sure you sign a well-worth-compensated contract,” Quinn said.

“But, again, I’m not GM. I’m not Roquan. I’m not the owner. I’ve got my two cents and I’m sure no one cares about them anyway.”