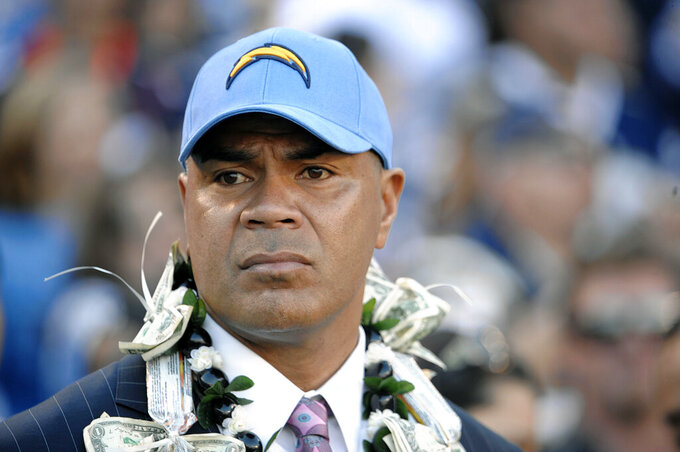 FILE - Late NFL star Junior Seau attends his induction into the San Diego Chargers Hall of Fame in San Diego on Nov. 27, 2011. The San Diego Union-Tribune reported that Seau's brother, Savaii Seau was killed in a collision with a dump truck in the the San Diego suburb of Lakeside, on Tuesday, Feb. 1, 2022. Junior Seau was found dead in 2012 from a gunshot wound to his chest. (AP Photo/Denis Poroy, file)

SAN DIEGO (AP) — Officials have identified the 56-year-old driver killed in a collision with a dump truck in a San Diego suburb as Savaii Seau, the brother of the late Chargers star and NFL Hall of Famer Junior Seau, according to the San Diego Union-Tribune.

Seau was driving in the suburb of Lakeside on Tuesday afternoon when his Audi drifted into a southbound lane and smashed into a water district truck, according to the newspaper. California Highway Patrol officials could not be immediately reached for comment.

The newspaper reported that Seau was not wearing a seat belt. He died after being taken to a hospital. Seau’s wife was with him and suffered minor injuries along with the driver of the truck, according to the California Highway Patrol and a family member who spoke to the newspaper.

Investigators said they do not know if drugs or alcohol were involved in Tuesday’s crash and were awaiting results from toxicology tests, which could take months.

Seau taught physical education at a private school that runs from preschool to 8th grade. He also coached flag football, basketball, and track at its middle school campus and was an accomplished artist who taught art in the school’s summer programs, said Raymond Volker, the headmaster at Warren-Walker.

“The hearts of the entire Warren-Walker School community are heavy as we have lost a great human being, teacher and friend today,” the headmaster said in a statement.

His brother, Junior Seau, played 21 years as a linebacker with the Chargers, Dolphins and Patriots. He died in 2012 of a gunshot wound to the chest and was found to have chronic traumatic encephalopathy, or CTE, which can only be diagnosed after death.

Junior Seau was a 10-time All-Pro and 12-time Pro Bowl selection, and was posthumously elected to the Pro Football Hall of Fame in 2015.