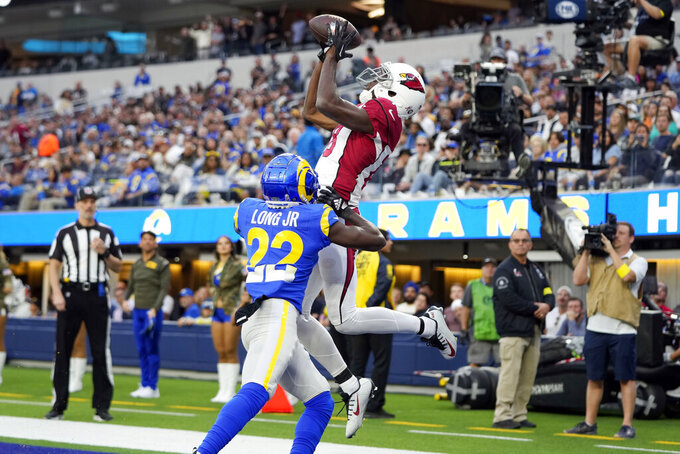 TURNOVER DIFFERENTIAL: 49ers minus-3; Cardinals plus-5.

49ERS PLAYER TO WATCH: WR Brandon Aiyuk has at least 80 yards receiving in four straight games. He has 27 catches for 330 yards and three TDs in that span. Aiyuk is looking to become the first Niners player to do it in five straight games since Terrell Owens in 2000.

CARDINALS PLAYER TO WATCH: WR Rondale Moore has emerged as a reliable second option next to three-time All-Pro DeAndre Hopkins. The second-year player caught nine passes for 94 yards against the Rams.

KEY MATCHUP: San Francisco's stellar defense will be a challenge for whomever the Cardinals put behind center. Starter Kyler Murray (hamstring) missed last week's game and backup Colt McCoy led the Cardinals to a win. But McCoy's got his own injury issues after tweaking his knee against the Rams.

KEY INJURIES: 49ers DT Arik Armstead (foot, ankle) was trying to get back to practice this week. He hasn’t played since Week 4. ... WR Danny Gray is day to day with an ankle injury. ... The Cardinals are watching the health of both QBs. Murray said Wednesday that he was hopeful he could play. Arizona's third-string QB is Trace McSorley. ... TE Zach Ertz (knee) is out for the season after getting hurt against the Rams. ... The Cardinals will be missing at least three starting offensive linemen. They hope LT D.J. Humphries (back) can return for Monday's game.

SERIES NOTES: The Cardinals have won 11 out of the past 14 games in the series ... The two teams meet in Mexico City for the first time since 2005, which was the first regular-season NFL game played outside the U.S. The Cardinals won that game 31-14.

STATS AND STUFF: San Francisco is seeking its first three-game winning streak of the season. ... The 49ers are 2-1 in international games, losing to Arizona in Mexico City in 2005, and beating Denver (2010) and Jacksonville (2012) in London. ... The Niners spent the week practicing in Colorado to acclimate to the high altitude in Mexico City. ... San Francisco is seeking its first 4-0 start against NFC West rivals since 2002. ... The Niners lead the NFL converting 45.5% of third downs when needing at least 10 yards. ... San Francisco has allowed no points in the second half of its past two games. ... Coach Kyle Shanahan has a 48-48 record since joining the 49ers in 2017, including the playoffs. He is seeking to have a winning record for the first time after losing the previous six times he had a chance. ... Niners S Talanoa Hufanga’s four INTs this season are the most for 49ers since Perrish Cox had five in 2014. ... San Francisco DE Nick Bosa has at least one sack in seven of eight games this season. ... 49ers QB Jimmy Garoppolo has a 109.9 passer rating on third down this season. ... Garoppolo is 32 for 33 in his converting runs on third or fourth-and-1. ... The Cardinals opted to stay at their home facility in Tempe this week rather than travel to higher altitude to get ready for the game in Mexico City. Estadio Azteca sits at an elevation of more than 7,000 feet. ... The Cardinals could become the first NFL team with multiple victories in Mexico. ... Arizona has had an NFL-high 76 players appear in at least one game this season. ... Safety Budda Baker had an interception in both games against the 49ers last season. He also had an interception in last week's game vs. the Rams. ... DL J.J. Watt had five quarterback hits against the Rams last week. It was the 17th game of his career with at least five quarterback hits. No other active NFL player has hit that mark in more than five games. ... The Cardinals have scored 62 points off turnovers this season, which ranks third in the NFL behind New England and Philadelphia. ... WR DeAndre Hopkins has caught a pass in 140 straight games, which is the longest active streak in the league.

FANTASY TIP: Cardinals RB James Conner should get a hefty workload after the team surprisingly released backup Eno Benjamin on Monday. Conner scored two TDs last week and has generally been a TD machine since joining the Cardinals last season. He appears to be healthy after sitting out multiple games with a injury to his ribs earlier this season.