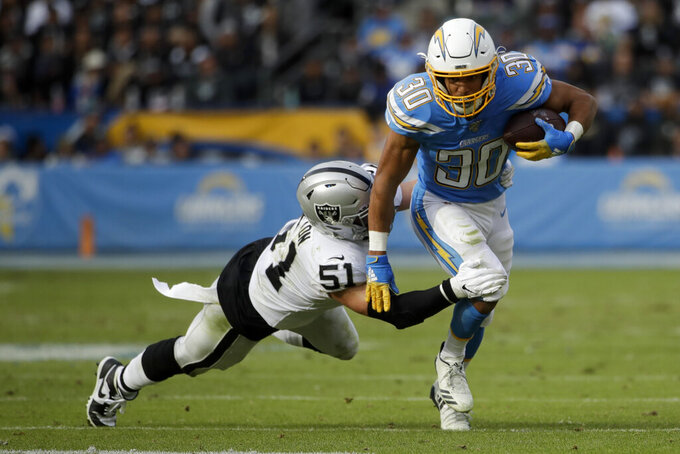 “It is one of those things I wasn’t thinking about at the beginning of the season, but now that I know I can do it I want to get it because it would put a stamp on the year,” he said.

Ekeler was signed by Los Angeles as an undrafted free agent in 2017. He was mostly on special teams as a rookie but began to have more of a role in the offense last season as a more dynamic change-of-pace option to Melvin Gordon. When Gordon missed training camp and the first four games due to a contract dispute, Ekeler became the lead back.

He made an instant impact in the opener against Indianapolis with 154 yards from scrimmage and three touchdowns, including the game winner in overtime. Even when Gordon ended his holdout, Ekeler still has been one of the focal points in the passing game. He has six games of six or more receptions and four 100-yard receiving games.

“He’s so versatile. Just starting to put him out wide, running the routes that he’s been able to run on the route tree,” offensive coordinator Shane Steichen said. “Obviously, making guys miss in the open field, that’s one of his strong points. He has done that all year.”

Of Ekeler’s 83 catches, 24 have come in flat while 23 have come on screens. He is averaging 13.4 yards on screens, which included a 55-yard touchdown against the Colts and a career best 84-yard score three weeks ago at Jacksonville.

It was also in the Jaguars game that Ekeler had 213 scrimmage yards and became the second Chargers running back with 100 yards rushing and receiving in a game. James was the first in 1985.

“This season personally for me has been an awakening. I proved I could play more than running back,” he said. “I can play the slot and also be used on speed sweeps.”

Ekeler isn’t the only one chasing a 1,000-yard receiving year. If Ekeler and Mike Williams can both reach the milestone on Sunday, they would join to Keenan Allen to become the sixth trio to reach 1,000 yards for a team in a season. Williams needs 37 for his first 1,000-yard campaign.

Carolina’s Christian McCaffrey needs 67 receiving yards to become only the second running back to have 1,000-yards rushing and receiving the same season.

Los Angeles has generated plenty of yards through the air but it hasn’t translated into wins. The Chargers (5-10) will have a losing record for the first time in Anthony Lynn’s three seasons as coach and are on the verge of going winless in the AFC West for the first time since 1984.

“We don’t know what they are going to do upstairs,” Ekeler said. “We were too inconsistent all year. We needed to make more plays. It is great we had the yards but in the grand scheme of things we didn’t do enough.”

Notes: Left tackle Russell Okung will miss Sunday’s game due to a groin injury. The veteran lineman played in only six games this season after missing the first eight due to treatment for blood clots. Trey Pipkins is expected to start for the second straight game but Lynn said Trent Scott would also see some time.