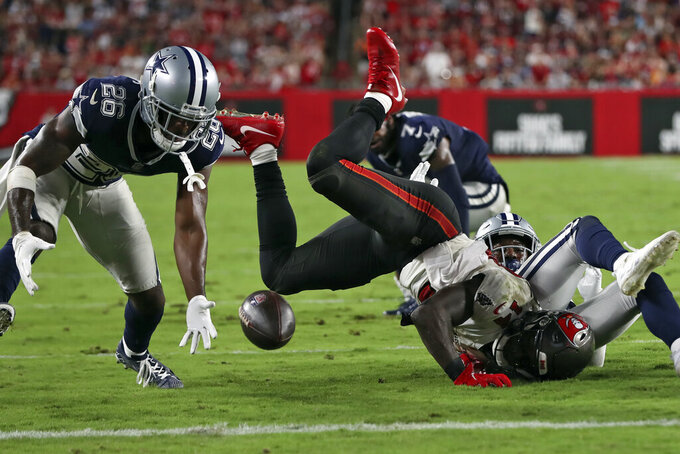 If it's feeling like 2020 all over again for the Dallas Cowboys, when Dak Prescott's broken ankle headlined several key injuries on offense, the star quarterback doesn't want go to there.

“We're not going to sit here and think about last year and try to compare the two or worry about going down that slope,” Prescott said Thursday, a day after Lawrence was injured in practice. “That was then, this is now. We know we have to get better with what we've got.”

It was a steep slope last year, when Prescott's three most important offensive linemen didn't play together because of various injuries and Blake Jarwin, the tight end they had just committed to financially, was lost for the season in the opener with a knee injury.

The Cowboys finished 6-10 in coach Mike McCarthy's Dallas debut. This time, their bad news on personnel has mushroomed since an encouraging opener. Dallas lost at defending Super Bowl champion Tampa Bay 31-29 on a last-second field goal.

Besides Lawrence, Gregory and Collins, a fourth starter from that game, receiver Michael Gallup, will spend at least three weeks on injured reserve after straining a calf against the Buccaneers.

Behind Gregory and Lawrence, the other five currently active defensive ends have a total of 10 career sacks. Tarell Basham, a fifth-year player signed as a free agent from the New York Jets, has 7½ of them.

The rash of injuries even took down one of the coaches. Assistant defensive line coach Leon Lett, who played on the Super Bowl-winning teams of the 1990s in Dallas, tore a quad muscle Wednesday when he got caught up in a blocking sled. Lett had surgery, as did Lawrence, who was placed on IR.

“The reality of it is, this is how it goes year in and year out,” McCarthy said. “It’s just a matter of how many. As I’ve stated, the injuries are so personal to the individual. But in the team concept and the team environment, we’re focused on who’s the next guy up, the opportunities.”

The Cowboys could be without a fifth starter from the opener if safety Donovan Wilson can't recover from a groin injury that has kept him out of practice so far this week. The other starter at safety, Damontae Kazee, was added to the injury report Thursday with a thigh issue.

“Things happen. You just have to keep pushing forward,” said receiver Amari Cooper, who had 139 yards receiving against Tampa Bay, the most in an opener in his seven-year career. “Keep adapting. I feel like everything is going to be cool.”

Just when it looked as though the Cowboys would have their top three offensive linemen playing together for the first time since 2019, Collins was suspended the day after the Tampa game for violating the NFL's substance-abuse policy.

Dallas is getting some good news with the return of four-time All-Pro right guard Zack Martin, who missed the opener after testing positive for COVID-19 five days before the game.

Collins missed all of last year with a hip issue, and left tackle Tyron Smith was limited to two games because of a neck injury. Martin played a career-low 10 games while battling calf problems. Now those three can't play together before Halloween.

But at least the Cowboys can say most of their offensive players are healthy now. So far this year, it's the defense's turn to deal with injuries. And the players are resisting talk of “here we go again.”

“We can’t afford to think like that,” linebacker Jaylon Smith said. “We’ve just got to continue to fight adversity, and that’s something that every team experiences every year. DeMarcus, he’s strong, he’s been through a lot, he’ll bounce back. We’ll have him at the right time.”