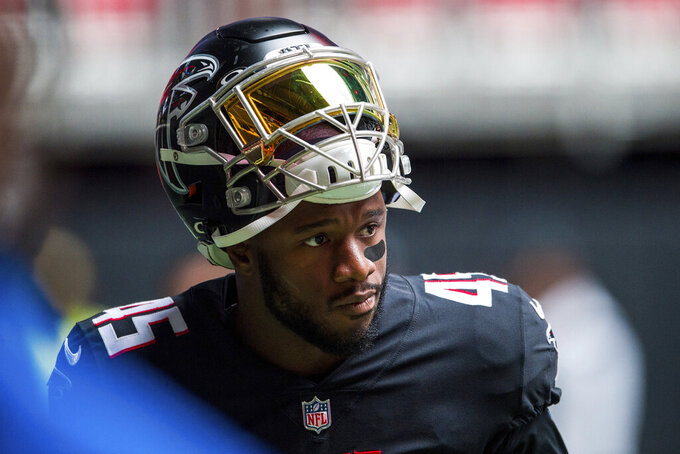 FLOWERY BRANCH, Ga. (AP) — Atlanta Falcons linebacker Deion Jones, who missed most of the preseason while recovering from offseason right shoulder surgery, will open the season on injured reserve.

Mayfield was expected to open the season behind starter Elijah Wilkinson at left guard.

Jones' status had remained uncertain even after he came off the physically unable to perform list to play the final preseason game against Jacksonville. Jones was a 2017 Pro Bowl selection.

Rashaan Evans and Mykal Walker are expected to start at inside linebacker when the Falcons open their season against New Orleans on Sept. 11.

Mayfield missed practice with a lower back injury. Davidson had knee surgery on Aug. 18 while Oliver is still recovering from knee surgery which ended his 2021 season. FitzPatrick missed the final preseason game with an undisclosed injury.

The Falcons signed tight ends Anthony Firkser and Tucker Fisk and cornerback Ka’dar Hollman to the practice squad. The team has room for only one more player on its 16-man practice squad.