Floyd sets sights on All-Pro honors after staying with Rams 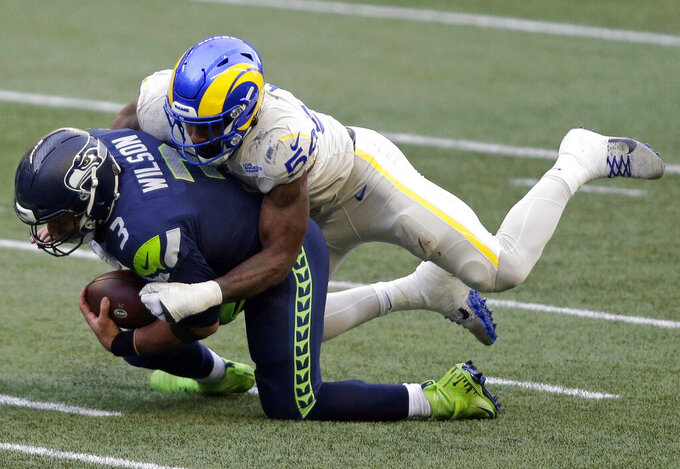 FILE - In this Dec. 27, 2020, file photo, Seattle Seahawks quarterback Russell Wilson (3) is sacked by Los Angeles Rams outside linebacker Leonard Floyd (54) during the first half of an NFL football game in Seattle. Floyd is overjoyed to be back with the Rams after producing a career-high 10 ½ sacks for Los Angeles last season. He believes the Rams are a Super Bowl contender with a defense that was the best in the NFL last season. (AP Photo/Scott Eklund, File)

LOS ANGELES (AP) — Leonard Floyd is much more than a pass rusher to the Los Angeles Rams, and that's why they gave him $64 million to stick around for four more seasons.

The Rams are also much more than a free-agent destination to Floyd, who is overjoyed he got to stay with a franchise and a head coach that realized his full potential.

Floyd said he's “still at a loss for words” Thursday when the linebacker thinks about getting his hefty deal with Los Angeles a year after he was unceremoniously released by the Chicago Bears. Floyd bet on himself by signing a one-year deal with the Rams last spring — and he cashed in with a 10 1/2-sack season, ninth most in the NFL.

But even with long-term security, Floyd didn't sound satisfied in a conversation from his offseason home, where he plans to skip vacations in favor of workouts and family time for the rest of the offseason.

“I definitely want to keep adding on to my game,” Floyd said. “I want to make the All-Pro team and things like that. More work to be done. More stuff in the lab.”

Another goal looms even larger.

“My driving motivation is to get the ring, especially after last year,” Floyd said. “I felt like we could have got the ring just off defense alone, and I just feel like if we come back in this year with that focus and that mindset, we can do some big things in LA, and that’s pushing me, man. That’s driving me, wanting to be the best.”

After joining Sean McVay and then-Rams defensive coordinator Brandon Staley, Floyd emerged as a versatile all-around contributor for the NFL's No. 1 defense. His performance turned him into a sought-after free agent, but Floyd candidly admits he realized how much of his success was a product of being with the Rams.

“They knew I wasn’t trying to go nowhere else, and that’s all she wrote,” Floyd said. “I wanted to play with AD and Jalen Ramsey. I wanted to run it back. This was the best defense in the league last year, so I want to stick around with the same players and try to do it again.”

Being a teammate of three-time AP Defensive Player of the Year Aaron Donald is a great way to excel, particularly as a pass rusher. Floyd capitalized on those opportunities as both a successful pursuer of quarterbacks and an elite run defender who sets the edge superbly. Floyd also is capable of covering receivers, giving him extraordinary value.

“He's more than just an edge rusher,” Rams general manager Les Snead said last week. “That position evolved last year. Leonard is a special athlete with instincts and the athletic ability to be more than just a disruptor."

Floyd's versatility was a key to the Rams' outstanding defensive season, and he sounds optimistic about their chances of maintaining that standard amid big offseason changes, including the losses of Staley and four starters.

Floyd admits the loss of Brockers was surprising and damaging: “Brock was a big leader for the defense. It’s going to take a collection of all of us to make sure we’re all focused, locked in and ready for each game.”

Those moves all happened after the Rams lost Staley to the Los Angeles Chargers. Floyd is particularly close to Staley, and he admits they “threw little hints” back and forth about Floyd moving to the Chargers.

But when the Rams made a top-drawer offer, Floyd didn't hesitate.

“(Staley) knew I wanted to be with Coach McVay, and he knew it was time for him to get out on his own and do his own thing,” Floyd said. “It worked out for the best. ... (McVay) gets you motivated, man. All week I’m itching to play, just from McVay having team meetings and getting everybody looking forward to the game. He’s just a great coach, man. He brings the best out of you.”