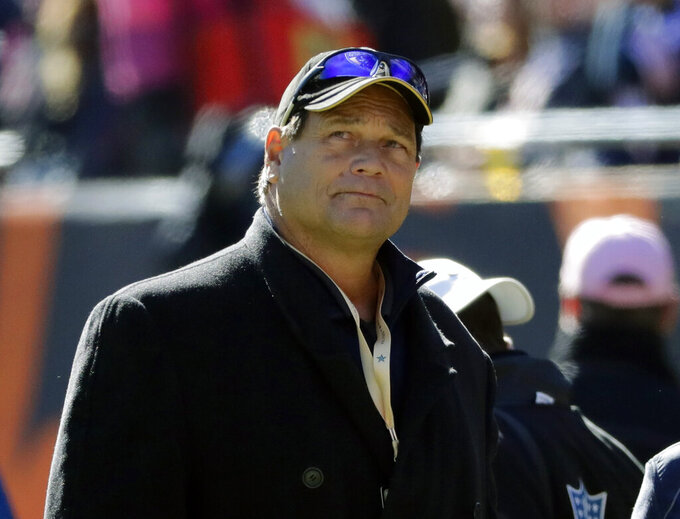 FILE - Former Chicago Bears player Dan Hampton stands on the sideline during the first half of an NFL football game between the Bears and the New England Patriots, Oct. 21, 2018, in Chicago. Pro Football Hall of Famer Hampton has been arrested in Indiana for allegedly driving a vehicle while drunk. The Lake County Sheriff's Office in Indiana says Hampton was arrested last weekend in Winfield on a charge of operating a vehicle while intoxicated. (AP Photo/Nam Y. Huh, File)

WINFIELD, Ind. (AP) — Former Chicago Bears defensive lineman Dan Hampton, who was elected to the Pro Football Hall of Fame in 2002, has been arrested in Indiana for allegedly driving a vehicle while drunk.

The Lake County Sheriff’s Office in Indiana said Hampton was arrested Nov. 20 on a charge of operating a vehicle while intoxicated in Winfield, where he lives. Winfield is about 50 miles (80.47 kilometers) from Chicago.

Hampton bonded out of jail the next morning after bail was set at $25,000.

Hampton, 64, played for the Bears from 1979, when was drafted with the fourth overall pick, until 1990. He was a member of the Bears' Super Bowl-winning team following the 1985 season.

Hampton played in college at Arkansas, where he was a two-time Southwestern All-Conference selection and Defensive Player of the year in his final season.

After retiring as a player, he worked as a TV and radio analyst, including as a host of the “The Hamp & O’B Show” on Chicago’s WGN Radio.

Messages left Sunday for Hampton at the station were not immediately returned. A listed phone number for him could not be located Sunday.