Garrett, Clowney back as Browns prepare for Ravens, Jackson 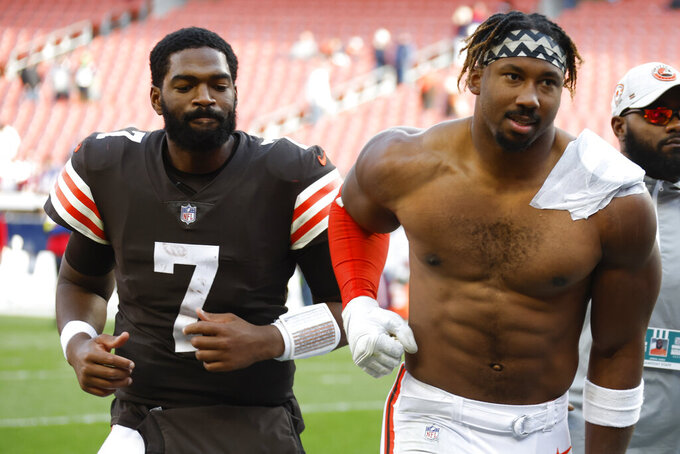 BEREA, Ohio (AP) — The Browns got their defensive bookends back.

Myles Garrett and Jadeveon Clowney returned to practice Thursday, a significant development for a struggling Cleveland defense that will be stressed by elusive Baltimore quarterback Lamar Jackson on Sunday.

Garrett has been bothered by a sprained left shoulder he injured when he crashed his car last month. The All-Pro sat out the final minutes of last week's 38-15 blowout loss to New England and didn't practice Wednesday so he could have another day's rest.

But the team's career sacks leader was back on the field along with Clowney, who has missed three of the past four games with a sprained ankle.

The Browns listed both Garrett and Clowney as “limited” on their practice participation report.

Cleveland's two edge rushers are good on their own, but even better together and without them the Browns (2-4) would be in big trouble against the multi-dimensional Jackson, who turns broken plays into big gains.

Jackson's 451 yards rushing are fifth in the NFL.

Top cornerback Denzel Ward remains in concussion protocol and it's looking as if he'll miss his second game in a row. Rookie Martin Emerson Jr. started in Ward's spot against the Patriots and held his own.

Cleveland's defense has been beset with problems all season with communication breakdowns and missed tackles atop the long list of issues.

Coordinator Joe Woods, who has been criticized for his scheme, has been puzzled by why his unit, which was supposed to be one of the team's strengths, has not performed up to expectations.

“It's really hard to explain,” he said before Thursday's practice. "We had a really good offseason. We had a really good training camp. Just with our walkthroughs, just did a lot more. To me, it was the best we ever did since I have been here, but it did not translate into the regular season.

"To me, when that happens, then you have to look at what you are asking to do and pull things back until you get things corrected. Then once you get them corrected, then you start adding on things that you feel will help you versus a particular team. It's a little surprising to me just the issues we are having.”

Woods said he's not making any personnel changes, though it's possible linebacker Deion Jones makes his debut this week. The six-year veteran was recently acquired in a trade from Atlanta to bolster the Browns' suspect run defense.

“We are taking it day by day because he's learning the system and getting comfortable with the techniques,” said Woods, who lost captain and signal caller Anthony Walker Jr. to a season-ending injury. "Hopefully, he plays, but we will see.”

Jackson gets himself into trouble when he tries to do too much, but the biggest issue for the Ravens (3-3) has been an inability to finish. Baltimore has blown double-digit leads in the second half of all three loss, and been outscored 64-22 in the fourth quarter.

The Browns have spent the week gearing up for Jackson, who is a threat every time he touches the ball.

"You gotta play him true so we’re definitely gonna have a tough week against a guy like Lamar, but I think we’ll be ready.”