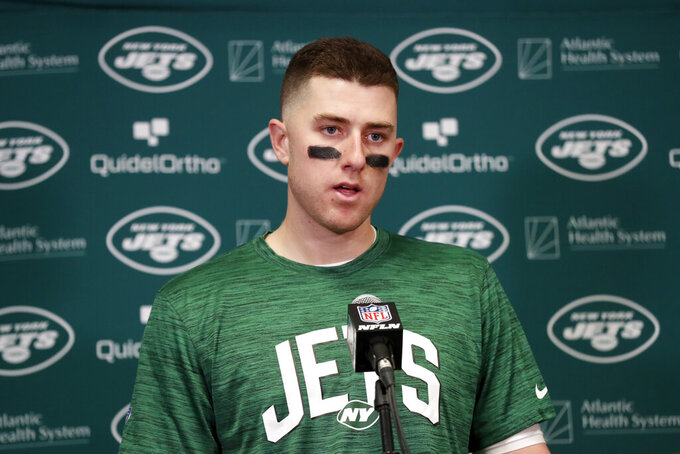 FLORHAM PARK, N.J. (AP) — Mike White was wrapping up his interview session with reporters in the New York Jets locker room when he asked someone in the back of the scrum if he had any questions.

“Yeah, how are you feeling, like, about the receiver group and everything about it?”

White, not missing a beat, went on about the Jets' “really good” group and named all of the receivers — including the practice squad players — before mentioning “this dude named Elijah Moore.”

“There ya go,” a laughing Moore said.

Then came another question, this time from running back-turned-reporter Michael Carter: “What's it like being from South Florida, and do you think there's like a different pedigree being from there?”

“Oh, 100%,” White said. “You wouldn't understand that because you're not from Florida.”

Laughs and chuckles all around — even from Carter, who played at North Carolina but grew up in Navarre, Florida, which is in the Florida Panhandle.

Yep, White's got jokes. He's also got command of the Jets' starting quarterback job, stepping in for the benched Zach Wilson and keeping New York in the thick of the AFC playoff hunt.

And White is doing it with efficiency on the field and confidence in the huddle.

“The guy’s a tough, resilient dude,” offensive coordinator Mike LaFleur said. “And no matter what happens, the first quarter to the third quarter to last week, he’s just learning. And it’s kind of cliché, he’s got ice in his veins. He really does."

That's an impressive trait, considering White has started just five regular-season games in the NFL, including the past two.

But his demeanor has made believers of his teammates, especially after the Jets trailed 20-3 in the first half at Minnesota last Sunday and still had a chance to win late in a 27-22 loss.

“The kid plays with a lot of poise, blocks out noise and focuses on his job,” left guard Laken Tomlinson said. “It’s really great to have someone like him in the huddle.”

There was a glimpse of it last season when White started three games for the injured Wilson. He has a chance to make it last even longer when he gets a chance to play again Sunday against Buffalo, the team that ended his run last season.

“What happened a year ago?” White said while trying to keep a straight face before smiling.

Well, he threw four interceptions in a 44-17 loss to Buffalo. It turned out to be the last time he'd play in a regular-season game until a few weeks ago.

“It's always going to be part of my development,” he said. “I don't want it to beat me twice.”

White is the fifth player in the Super Bowl era (since 1966) with at least 350 yards passing in at least two of his first five career starts. He joined Cam Newton (three games), Jeff Blake (two), Kirk Cousins (two) and Jim Miller (two) as the only players to accomplish the feat. White has thrown for 684 yards with three touchdowns and two interceptions in his two starts this season.

White acknowledged he “most definitely” has to guard against wanting to avenge that loss to the Bills from a year ago.

“I think you can easily fall into that, and me personally, I'll do my best to make sure that doesn't happen.”

White attributes his cool, calm demeanor to his days as a fastball-hurling high school pitcher who drew interest from Division I and MLB teams for baseball before he focused full time on football.

“You're never too high, never too low,” White said. “I try to take that into the quarterback role.”

And he also applies it to his future, not concerned if his next start will be his last — or the next in what will be a long line of them for the Jets.

“I think it's more important to live in the moment,” he said. “Once you start worrying about other things, your mind wanders and it gets off the task at hand.”

NOTES: DE Micheal Clemons remained out after missing practice Wednesday with an illness. WR Corey Davis, CB D.J. Reed and OT George Fant, were limited in their returns after also dealing with the flu. ... Rookie OL Max Mitchell, placed on the non-football injury list Wednesday and out for the season, is recovering from blood clots in his right calf and lung, his father John told ESPN. He's taking blood thinners, but Mitchell told ESPN it's not considered a career-threatening situation.