Lions searching for a defensive base after two weeks 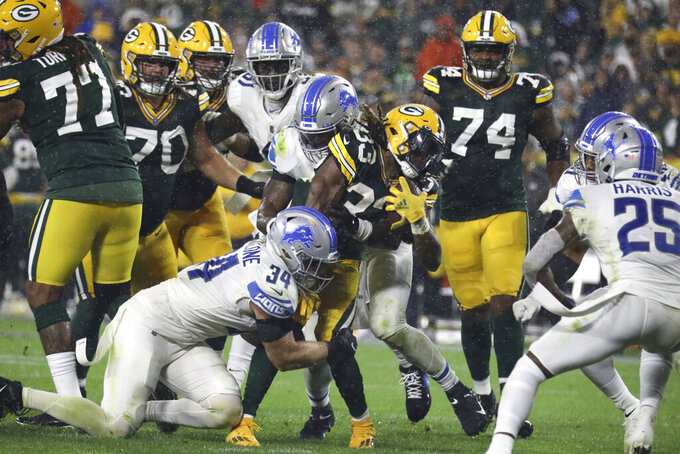 DETROIT (AP) — Two games into the season, Detroit Lions coach Dan Campbell is still trying to find a foundation for his struggling defense.

After giving up 41 points in a season-opening loss to the San Francisco 49ers, the Lions allowed 35 in an 18-point loss on Monday night. Only the Atlanta Falcons (80) have allowed more points in their first two games than Detroit.

While Anzalone was making a lot of plays, he and fellow linebacker Jamie Collins struggled in coverage. Green Bay running back Aaron Jones scored three of his four touchdowns receiving, and Aaron Rodgers had nearly as many touchdown passes (four) as incompletions (five).

“We've got to get to the quarterback,” Campbell said. “I didn't feel like our rush was there when it needed to be, especially on early downs.”

Jared Goff, given the tough task of replacing Matthew Stafford, has completed 68.8% of his passes and thrown for five scores in the first two games. He does need to limit the turnovers, as a pick-6 against the 49ers and a fumbled snap against Green Bay were turning points in the two losses.

“That was a game that was going back and forth offensively, which you kind of assumed with Aaron Rodgers,” Campbell said of the Green Bay game. “When you get into that type of game, your offense just has to find a way to score more points than they do. That doesn't leave room for many mistakes."

Detroit was already struggling to cover receivers before rookie cornerback Ifeatu Melifonwu went down with a thigh injury. Campbell confirmed Melifonwu will miss “a significant amount of time", which means the Lions will have to find a replacement on the practice squad or the free-agent wire.

Campbell said the coaching staff would be discussing ways to get rookie linebacker Derrick Barnes onto the field — snaps that would probably come at the expense of Collins or in a pass-rush role since Anzalone is Detroit's play-caller on defense.

When a team is 0-2 and allowing 38 points a game, the defense is clearly struggling. After all, the reason Campbell put the blame on the offense for the loss was that it was clear Green Bay was going to score almost at will, leaving Goff no margin for error.

Melifonwu was the only significant injury Monday night, but it will be a tough one to overcome. Detroit finished the game with Bobby Price, a converted safety, playing at cornerback. They do have veteran Daryl Worley on the practice squad — he has played 66 games over the past five seasons with the Panthers and Ravens.

9.4: The average yards the Lions are allowing per passing attempt. That's tied for last place in the league with the Kansas City Chiefs, and they don't have Patrick Mahomes and Travis Kelce to make up for it on offense.

The 0-2 start isn't what Campbell wanted, but he's had some experience with bad seasons in Detroit. In his three years as a player with the Lions, the team went 10-38, including the first 0-16 season in league history.

The Lions have a short week to figure out a way to stop Lamar Jackson and the Ravens before Sunday's home game. Jackson is averaging 237 yards passing and 96.5 yards rushing in his first two games, although he has turned the ball over four times in Baltimore's 1-1 start.