Panthers turn to defense, speed on final day of the draft 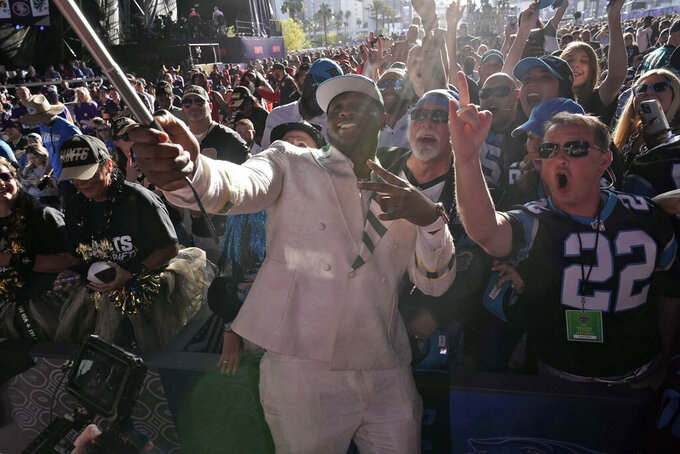 CHARLOTTE, N.C. (AP) — Carolina coach Matt Rhule went back to his college roots on the final day of the NFL draft.

The Panthers traded up into the fourth round to select Penn State linebacker Brandon Smith on Saturday, trading both of their fifth-round picks to Washington to make the move.

Like Smith, Rhule was once played linebacker for the Nittany Lions.

Rhule walked on at Penn State and played four years under Joe Paterno and was a three-time scholar athlete along with being an academic All-Big Ten selection in 1997.

Smith's resume was a little more accomplished, as he was third-team all-conference in 2021 and started his last 21 games at Penn State with 132 tackles during that time. He had five games last season with at least eight tackles, including 10 against Auburn.

“I got a text from Brandon that he didn't know that I played there,” Rhule said with a laugh. “You would be surprised, but there are not a lot of pictures of me hanging at the Penn State practice facility.”

Smith had no idea Rhule played for Penn State.

The Panthers finished the afternoon by selecting 6-foot-5, 246-pound edge rusher Amare’ Barno from Virginia Tech and 6-foot-5, 311-pound guard Cade Mays from Tennessee in the sixth round before taking Baylor cornerback Kalon “Boogie” Barnes in the seventh round.

The 6-foot-3, 250-pound Smith has good speed (4.52-second 40-yard dash) for a player his size and a 37 1/2-inch vertical leap. The Panthers hope he will help fill the void left by Haason Reddick, who signed with the Philadelphia Eagles in free agency after a double-digit sack season.

"I'm a violent blitzer," Smith said. “When I have my mind set on something, I will get it.”

Barno is also fast and Barnes played for Rhule at Baylor and ran a 4.23 40, the second-fastest time in the history of the NFL scouting combine.

“There were a lot of good accomplished players that had gone (on Day Three) and what was standing there was a bunch of almost freakish athletic guys,” general manager Scott Fitterer said. “We are a draft-and-develop organization and that is where we trust out coaches to develop them. ... Until they become impact position players we know that they can contribute on special teams with their speed and athleticism.”

Carolina entered the draft with pressing needs at left tackle and quarterback and addressed both in the first two days.

The Panthers selected North Carolina State offensive tackle Ikem “Ickey” Ekwonu with the No. 6 overall pick before trading up into the third round to select quarterback Matt Corral from Mississippi.

It was some nifty maneuvering from Fitterer, who entered the draft with only one pick in the top 136.

Ekwonu fills a major hole and is expected to start immediately at left tackle.

The Panthers allowed 52 sacks last season, fifth most in the NFL. The Panthers previously addressed their interior offensive line in free agency, adding Austin Corbett from the Rams and Bradley Bozeman from the Ravens.

Ekwonu is the first offensive tackle taken by the Panthers in the first round since Jeff Otah in 2008.

The Panthers took a chance on Mississippi quarterback Matt Corral in the third round after Pitt's Kenny Pickett, Cincinnati's Desmond Ridder and Liberty's Malik Willis went off the board.

Corral said he's fine with that.

“My competitive nature is going to obviously want me to be the starter and I am going to do everything in my power that I can to do that," Corral said.

P.J. Walker is the other quarterback on the Panthers roster.

“I would never put an absolute on anything,” Fitterer said.