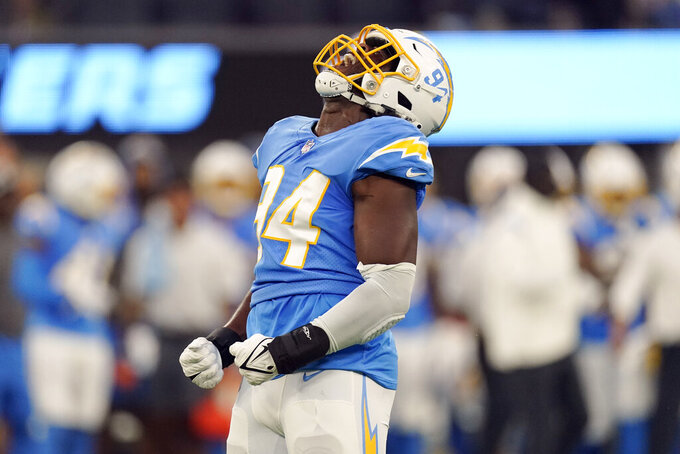 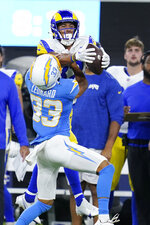 Perkins threw a pair of touchdown passes to McCutcheon as the defending Super Bowl champions held off the Los Angeles Chargers 29-22 in the preseason opener for both teams in which most of the starters for both teams did not play.

“I was really pleased with Bryce’s ability to be able to handle all the different situations that came up,” coach Sean McVay said of Perkins. “He’s a playmaker. I thought (offensive coordinator) Liam (Coen) did a good job of putting him in good spots to accentuate his skill sets.”

Perkins — the Rams' third-string quarterback last season — played the entire game with Matthew Stafford and John Wolford not dressed. He completed 9 of 16 passes for 126 yards and also showed off his mobility with 39 yards on eight carries, including a 1-yard TD midway through the third quarter.

McCutcheon, an undrafted free agent rookie who has drawn rave reviews from Super Bowl MVP Cooper Kupp during training camp, finished with five receptions for 87 yards. He also had a reception for a 2-point conversion following Perkins' rushing touchdown.

Perkins connected with McCutcheon for a 60-yard touchdown up the left sideline to give the Rams a 14-7 lead with 5:17 lead in the second quarter. McCutcheon got leverage over Chargers safety Deane Leonard, caught it at the Chargers 29-yard line and then avoided a tackle attempt from JT Woods before scoring.

“I just saw the ball in the air, and first I was just trying to come down with it. Went up in a contested catch, and was just able to move the ball away and get my arm in there,” McCutcheon said.

With the score tied at 22 in the fourth quarter, McCutcheon caught an 11-yard TD pass in the right corner of the end zone to put the Rams on top with 6:17 remaining.

“Whenever I’m out there, I'm really just trying compete my tail off for the guys. I know all those guys are fighting, so I just try to do my part and fight as well,” Perkins said.

The Chargers had the ball late in the fourth quarter and were driving to tie the game when Easton Stick's pass to Michael Bandy was picked off by Daniel Isom at the Rams' 8 with 27 seconds remaining. Bandy temporarily had possession of the ball before Isom was able to strip it for the pick.

Stick and Chase Daniel each played one half as Justin Herbert watched the game from the sideline.

“I think both played well," Chargers coach Brandon Staley said of his quarterbacks. "They moved the team, took care of the football and good decisions. That’s the way they’ve been throughout camp.”

Daniel threw for a pair of first-half touchdowns. The Chargers received the opening kickoff and scored in nine plays as Joe Reed split the Rams' secondary and hauled in a 41-yard TD pass less than four minutes into the game.

THE MORE YOU KNOW

Staley said facing a mobile quarterback like Perkins should be a valuable teaching tool going into the regular season.

“That’s life in the NFL. The best people you face are going to be like that,” Staley said. “We had him a couple times. Our guys are gonna learn that if you make those plays, this game could have gone differently.”

Chargers linebacker Troy Reeder, who played three seasons for the Rams, knew Perkins was going to be tough to bring down.

“I was telling our guys all night, I was like we got to keep him in the pocket," Reeder said. "He’s a special, special player, and when he gets out of the pocket it’s even worse for us, so I’m a huge Bryce Perkins fan. I think he’s a stud."

AJ Rose — who spent last season on the Vikings' practice squad — bounced off a pair of Chargers' defenders and scored from 1 yard out to tie it at 7 midway through the second quarter. Rose and Raymond Calais each had eight carries and got the most work among the Rams' running backs.

Stick led the Chargers on an 18-play, 75-yard scoring drive that took 10:15. The possession ended with Stick going 3-yards around right end for a TD early in the fourth quarter. Stick then completed a pass to tight end Hunter Kampmoyer for the 2-point conversion to make it 22-all.

The Rams' preseason opener came six months after they defeated the Cincinnati Bengals in the Super Bowl at SoFi Stadium.

Rams: DT Bobby Brown was helped off the field during the fourth quarter after he couldn't put any weight on his right ankle. Brown had a sack during the second quarter.