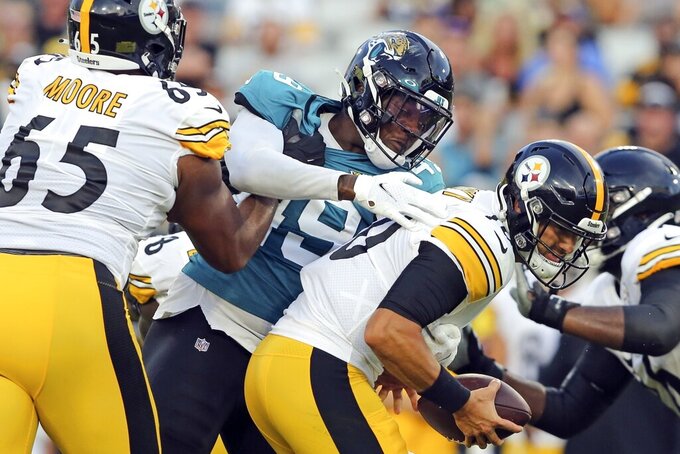 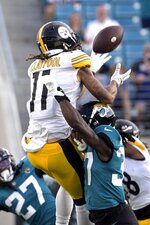 JACKSONVILLE, Fla. (AP) — Kenny Pickett’s second preseason performance was as impressive as his first, and it came against better competition.

Pittsburgh’s rookie quarterback completed 6 of 7 passes for 76 yards and a touchdown in a 16-15 victory at Jacksonville on Saturday night.

Pickett, who threw two second-half TD passes while working with backups against Seattle last week, was on the field much earlier against the Jaguars (0-3). He played with and against starters — and fit right in.

“The more and more you play, the more comfortable you get. That's just how it goes,” Pickett said. “The more reps I get, the better I feel in the system. ... Whatever number they have me as, I don't care. I'm going to go out there and play every single time as hard as I can."

Although his first series was mostly a mess because of miscues, his second was about as good as could be expected.

The 20th overall pick and former Pitt standout directed a 63-yard touchdown drive in the final minute of the first half, capping the 42-second series with an 11-yard toss to running back Benny Snell. It came one play after Pickett found Diontae Johnson for a touchdown that was nullified by offsetting penalties.

Pickett's TD drive was so troubling for Jacksonville coach Doug Pederson that he sent his defensive starters back onto the field to open the second half. They responded by forcing a three-and-out.

“Did you see that two-minute drive?” Pederson said.

Pickett’s two exhibition games have to make the Steelers (2-0) feel good about the long-term outlook at the all-important QB position. Mitch Trubisky appears to have a solid grasp on the starting job to replace the retired Ben Roethlisberger, but Pickett probably won’t be waiting in the wings long.

“We'll address depth chart-related things over the next couple of days as we zero in on our next opportunity,” Tomlin said. “I don't make knee-jerk reactions or statements following a performance.”

Pickett has completed 19 of 22 passes for 171 yards in the preseason, with three touchdowns and no turnovers.

Trubisky was 5-of-8 passing for 60 yards, ending three drives with two punts and a missed 53-yard field goal.

Mason Rudolph had a sluggish start while playing the entire second half. His first three drives ended in a punt, a safety and a fumble. But his 1-yard TD pass to rookie Tyler Snead on fourth-and-goal from the 1 put the Steelers ahead for good with 1:07 remaining.

“I thought he looked like a varsity guy in the JV game, and I told him that,” Tomlin said.

The Jaguars dominated early, with second-year quarterback Trevor Lawrence leading four drives that crossed midfield. They ended with a missed field goal, two makes and a turnover on downs.

Still, it was more positive vibes for Pederson’s team.

Lawrence completed 14 of 21 passes for 133 yards, including a perfectly placed 14-yarder to Marvin Jones after which Lawrence playfully wagged his index finger at a defender.

Christian Kirk, who signed a four-year, $72 million contract in free agency, had five receptions for 54 yards in his Jaguars preseason debut.

Travis Etienne, who missed his entire rookie season with a foot injury, ran for 29 yards.

The Jaguars had six players sidelined because of injuries. Cornerback Shaquill Griffin, running back James Robinson, cornerback Darious Williams, rookie linebacker Devin Lloyd and offensive linemen Will Richardson and Badara Traore did not dress. Defensive tackle Foley Fatukasi left the game early, and Pederson said he would offer an update in the next few days.

Former Georgia teammates George Pickens and Tyson Campbell met up in the third quarter like they rarely did in Athens. Campbell dropped Pickens for no gain on a third-and-3 play, a play that prompted Lawrence to grimace on the sideline.

Pickens, a rookie receiver with Pittsburgh, finished with two catches for 6 yards. Campbell, a second-year pro, has been Jacksonville’s most improved player this year and looks as if he could be a budding star.

Jaguars play at Atlanta next Saturday.