Ravens' Dobbins expected to miss season because of torn ACL 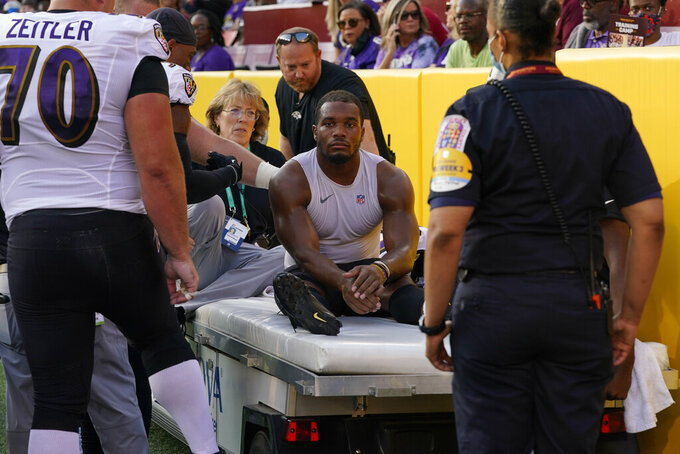 Baltimore Ravens running back J.K. Dobbins (27) is taken off the field after suffering an injury in the first half of a preseason NFL football game against the Washington Football Team, Saturday, Aug. 28, 2021, in Landover, Md. (AP Photo/Carolyn Kaster)

OWINGS MILLS, Md. (AP) — Baltimore Ravens running back J.K. Dobbins is expected to miss the 2021 season with a torn ACL.

“Been down this road before,” tweeted Zac Hiller, Dobbins' agent, while retweeting an ESPN report about the injury. “He’ll come back bigger stronger faster.”

Dobbins left the Ravens' preseason finale at Washington on Saturday night midway through the first quarter following his injury, and coach John Harbaugh said only that the former Ohio State star would be evaluated. The news Sunday is a blow for Baltimore, which led the NFL in rushing last season.

Much of the Ravens' rushing prowess of late has been because of quarterback Lamar Jackson, but Dobbins ran for 805 yards and nine touchdowns as a rookie last season. Gus Edwards, who ran for 723 yards and six TDs, could now play a more important role.

Baltimore set an NFL record Saturday with its 20th consecutive preseason victory, but this hasn't been an easy training camp for the Ravens. Jackson and Edwards both missed the start of camp after positive COVID-19 tests, and the team's revamped receiving corps has had injury issues as well.

Dobbins' injury will likely bring more questions about whether it's worthwhile for key players to play at all during the preseason. But Dobbins had only three carries in the team's first preseason game and four in the second. He had two Saturday. The injury actually came when he was tackled on a screen pass from Jackson, who was making his own preseason debut this year.

“All I know is (Dobbins) is one of the toughest guys out there,” Hiller wrote on Twitter on Saturday night. “No matter what it is this is only year 2 of 20.”