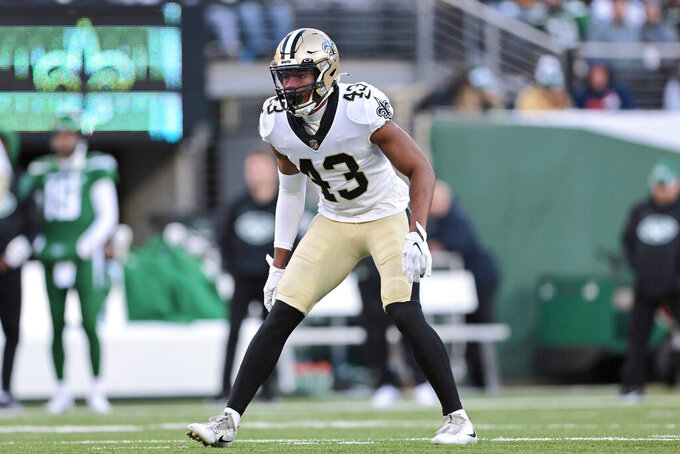 New Orleans Saints free safety Marcus Williams (43) defends during an NFL football game against the New York Jets, Sunday, Dec. 12, 2021, in East Rutherford, N.J. The Baltimore Ravens agreed to a five-year deal with safety Marcus Williams, bolstering a secondary that was decimated by injuries last season as the team finished last in the NFL against the pass. Wednesday, March 16, 2022 was the first day teams could officially announce deals with newly acquired free agents.(AP Photo/Adam Hunger, File)

The Baltimore Ravens agreed to a five-year deal with safety Marcus Williams, bolstering a secondary that was decimated by injuries last season as the team finished last in the NFL against the pass.

The Ravens allowed a league-high 279 yards passing per game last season. Cornerback Marcus Peters didn’t play at all after a preseason knee injury, and cornerback Marlon Humphrey went down in early December with a torn pectoral muscle.

Baltimore lost six straight games to end the season and missed the playoffs. Many of those defeats came down to the wire, but one that didn’t was a 41-21 loss to a Cincinnati team that eventually won the AFC North and went to the Super Bowl. Joe Burrow threw for 525 yards in that game, underscoring just how desperate the Ravens were for help in the defensive backfield.

The Saints used the franchise tag on Williams last season.

Williams started every game he appeared in for New Orleans, and he had a career high in tackles last season. He had at least 50 tackles and multiple interceptions in each of his first five seasons, joining Tyrann Mathieu, Jordan Poyer and Justin Simmons for the league’s longest active streak.

Williams was ranked by Pro Football Focus as the eighth-best free agent in this year's class.

Moses played for the New York Jets last year after spending his first seven seasons with Washington. The Ravens played almost all of last season without injured tackle Ronnie Stanley, and tackle Alejandro Villanueva is retiring.

Moses has played in 113 consecutive games, tied for the third-longest streak among active offensive linemen. Last season, he was one of 10 offensive linemen to play over 1,000 snaps without a holding penalty.