Saints' bye comes as an all-but-lost season winds down 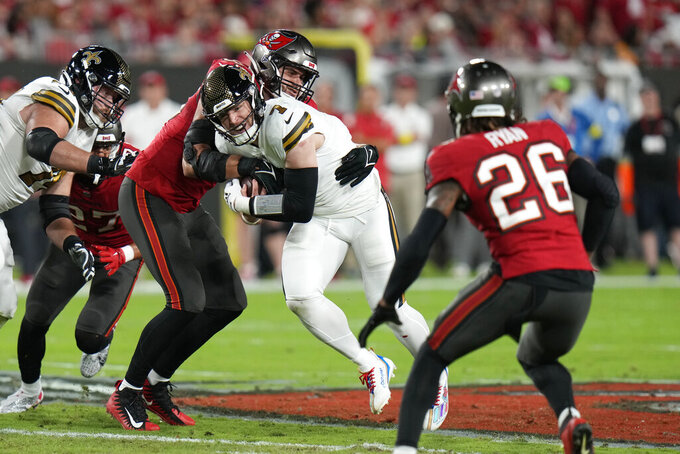 NEW ORLEANS (AP) — Saints star receiver Michael Thomas and season-opening starting quarterback Jameis Winston have not played since Week 3 — and that has turned out to be just the beginning of what has gone awry for New Orleans in 2022.

A Week 14 bye gives the Saints (4-9) a brief reprieve before they try to avoid their first 10-loss season since 2005. That was the year before the Saints hired Sean Payton, who became the winningest coach in franchise history before retiring after last season.

Under first-year coach Dennis Allen, the Saints arguably have been more competitive than their record — and last-place standing in the NFC South — would indicate. But they've been done in by not just bad fortune on the injury front; execution also has been a problem, particularly at pivotal junctures of close games.

“It hurts because I know how much all these guys in this locker room and on this coaching staff put into trying to win,” Allen said this week, following a 17-16 loss at Tampa Bay on Monday night in which the Saints held a 13-point lead with just more than three minutes left.

"I feel like we put ourselves in position to win on more than one occasion and for different reasons we haven’t been able to get the result that all of us would have liked,” Allen said.

Quarterback questions have plagued New Orleans since Winston hurt his back during a Week 1 comeback victory at Atlanta. He performed poorly the next two weeks, and even after he said he felt physically well again, Allen declined to play him, deferring instead to 35-year-old, 12-year veteran Andy Dalton.

Injuries have affected other key Saints players, including cornerback Marshon Lattimore, who has missed eight games, as well as center Erik McCoy, who's been on injured reserve since midseason.

At this point, the relatively late-season bye presents players a choice of wallowing in discouragement or coming back determined to exhibit the type of effort and production that could improve their individual career prospects — and perhaps give the Saints a foundation from which to build next year.

“There’s going to be a lot of reflection on us and what we can do better personally, and each unit and as a team,” Dalton said. “That’s kind of just where we’re at.”

Allen said the bye "is a time for guys to kind of get themselves recharged mentally, physically and emotionally, and get ready to finish out these last four games.”

Through Week 13, the Saints ranked 16th in total offensive yards and 11th in yards passing. Their 20.4 points per game ranks 21st, but is as good or better than several playoff contenders, including the New York Giants, Tampa Bay, Tennessee and Washington.

“We're moving the ball,” said Allen, who largely oversees defense and has entrusted the offense to coordinator Pete Carmichael, a fellow holdover from the Payton years. “We're doing some good things offensively. But yet, we have an opportunity to make some plays — we don't make them.”

Defensively, the Saints rank 11th in yards allowed through 13 weeks, 17th in points allowed and ninth in total sacks.

But New Orleans has been hampered repeatedly by untimely penalties that have either stalled their own drives or sustained those of their opponents. And their minus-12 turnover differential ranks 31st.

Such errors have been particularly costly in five losses by eight or fewer points, including three by four or fewer.

“It’s unfortunate that we keep having to say the same thing over and over," Dalton said. ”The missed opportunities have hurt us. We’ve had chances in a lot of games this year. We haven’t made plays when we needed to.”

The Saints remain mathematically alive in the NFC South, but trail Tampa Bay by 2 1/2 games with four to play — and the Buccaneers would win any ties thanks to victories in both meetings.

“We have to win them all," said rookie receiver and returner Rashid Shaheed, whose emergence has been among the Saints' bright spots in recent weeks. "We have to continue to battle as a team. We have to stick together. We can’t let anything divide us. ... We’re going to continue to fight and throw punches until it’s all over.”