Saints' defense encouraged by strides made since opener 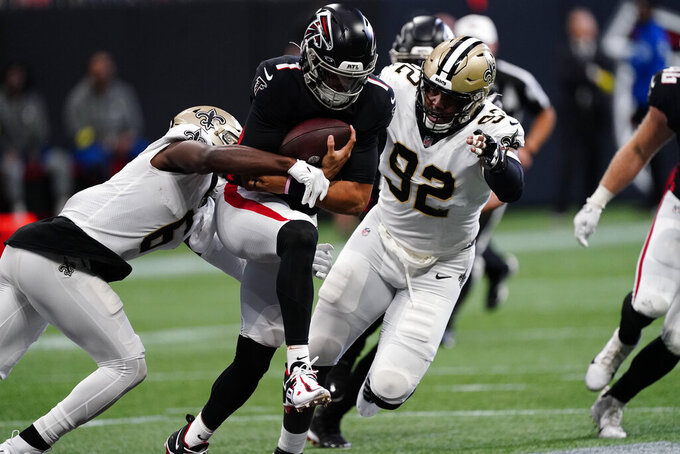 METAIRIE, La. (AP) — Saints coach Dennis Allen entered this week sounding more optimistic about the defense he oversees — even if he wasn't particularly happy about outcome of his team's latest game.

New Orleans (1-1) boasted the seventh-ranked defense in the NFL last season and has many core players back on that side of the ball.

The unit hardly lived up to its reputation in New Orleans' 27-26 comeback victory at Atlanta to open the season. But the way it stifled Tampa Bay's Tom Brady-led offense for most last Sunday's loss in New Orleans had Allen offering largely positive reviews heading into this Sunday's road game at Carolina (0-2).

“We played really well in the run game," Allen said. "We challenged in coverage, which was good to see. We affected the quarterback.

“The ball got out pretty quick in that game, but yet he wasn’t throwing to a lot of open receivers,” Allen continued. "So, I thought overall it was effective.”

Opponents’ total net yards plummeted from the 416 gained by the Falcons to 260 by the Buccaneers.

The Saints held Tampa Bay's ground game, led by Leonard Fournette, to just 2.4 yards per carry after allowing 5.3 yards per rush in Atlanta. Brady finished with 188 yards passing and one touchdown — the only offensive TD scored by Tampa Bay in a 20-10 game that also included an interception of Saints QB Jameis Winston for a score.

“Kind of what we expected," Saints defensive end Marcus Davenport said of his unit's performance. “Hard-fought game, back and forth. We tried to get as many stops as we can. ... I felt like we were pretty decent on third down.”

Indeed, the Saints stopped the Bucs on 12 of 17 third-down plays and and also stopped a Fournette run short on fourth-and-1.

“They are one of the top defenses in the NFL right now," Carolina coach Matt Rhule said. “That is because of their prowess on third downs and their prowess in the red zone.”

Rhule said Davenport and fellow defensive end Cameron Jordan make quarterbacks uncomfortable. Meanwhile, Rhule said, the Saints cover well in the secondary, led by Marshon Lattimore, who he sees as “one of the best (cornerbacks) in the league.”

Rhule also noted how the Saints “will mix it up on you” in the secondary, using both zone and man-to-man schemes.

The Saints' secondary could get an additional boost if cornerback Paulson Adebo plays for the first time this week. He's missed the first two games with an ankle injury, but practiced on a limited basis on Wednesday.

“Really savvy, a lot of experience on that defense,” Mayfield added. “So, they’ve seen every look possible.”

But Mayfield, with his mobility, presents the Saints' defense with a challenge it has not always handled well.

“He really creates some things with his feet,” Allen said, adding that Mayfield can "extend the play and create some opportunity down the field with kind of some off-schedule throws.”

In Atlanta, the Saints faced an adept scrambler in Marcus Mariota and did not sack him once. Last week, the Saints sacked Brady only once, but Allen said he wasn't too concerned because Brady avoided sacks by making a lot of rushed throws that either were not caught or were too short to sustain drives.

Last season, the Saints were among the NFL leaders in total sacks with 46. They'll need 45 in their next 15 games to match that.

But Davenport said disrupting the QB is most important, regardless of whether that's accomplished with sacks.

“Everyone grades off of sacks, but it’s not always one of those stats that you can apply to everything," he said.

NOTES: Winston remained limited in practice, as he was last week, because of his back injury. Alvin Kamara returned to practice for the first time in a week, also on a limited basis, because of his rib injury. Also limited were receiver and returner Deonte Harty (foot), safety Marcus Maye (rib), tight end Taysom Hill (rib), right tackle Ryan Ramczyk (elbow), receiver Tre'Quan Smith (shoulder) and fullback Adam Prentice (shoulder).