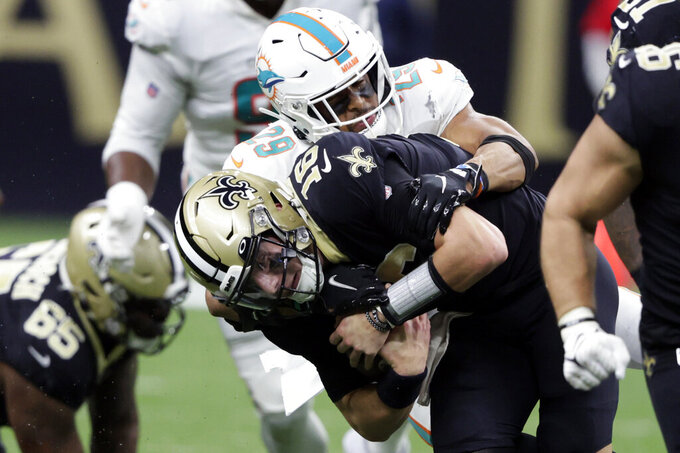 The very reason the rookie out of Notre Dame was pressed into service in the first place was a COVID-19 outbreak on the club that also robbed New Orleans' active roster of 16 players.

Add in a knee injury that made starting left tackle Terron Armstead a game-day scratch and it was bound to be a tough day for even an experienced QB — never mind Book, a fourth-round draft choice who'd been inactive for the first 14 games of his career.

Book was intercepted twice — once for a touchdown — and sacked eight times in a 20-3 loss to the Miami Dolphins on Monday night.

“He’s competitive and tough. He’s going to be fine," Payton said of Book. "He’ll be frustrated, like all of us, with some plays, but certainly it's not going to define his growth or his career or what he does.

“It was kind of one of those perfect storms,” Payton added. "We’re all anxious to see him and yet it was just a tough spot for him to be in.”

Book didn't have the benefit of having either of the Saints' starting tackles. Ryan Ramczyk was among the players placed on the club's COVID-19 reserve list. Reserve offensive tackle Jordan Mills, who started because of injuries in a victory at Tampa Bay a week earlier, also was placed on COVID reserve this week.

Receiver Tre'Quan Smith, the most accomplished Saints receiver available for the game, left with a chest injury and did not have a catch. The Saints' top two receiving tight ends — Adam Trautman and Juwan Johnson — also were on COVID reserve.

Unable to get comfortable with his pass protection, Book was quick to flee the pocket. He was a good scrambler in college, but found out how much quicker defenders' closing speed can be in the NFL. He was dragged down repeatedly on scrambles behind the line of scrimmage.

“I can’t take that many sacks,” Book said. "I've just got to throw it away and be smart. Trying to do a little too much.”

Book's ability seemed to be less of a problem than his decision-making. When Book was comfortable, he threw decisively and accurately, completing 12 of 20 passes for 135 yards. But he said Miami surprised him with some unexpected defensive looks.

The Saints expected Miami to play man-to-man coverage. Instead, they played a lot of zone.

“They’d never seen me play and they want to test my arm and make me throw into certain zones, which is a smart tactic," Book said. "They were taking away some shorter routes that we were trying to hit and I just got to move to the next level (downfield). There’s was definitely some of those I could have got.”

The Saints also were unable to move the ball on the ground consistently, rushing for 83 yards. New Orleans did not convert any of its 12 third downs.

New Orleans' defense, coming off a shutout of Tom Brady and the Tampa Bay Buccaneers, limited the Dolphins to just one offensive TD and two field goals. That was despite playing without starting linebackers Demario Davis and Kwon Alexander, or safety Malcolm Jenkins — all swept up in the COVID outbreak.

Marshon Lattimore had an interception. Cam Jordan had two sacks and Marcus Davenport had one. Miami's only offensive TD came on a shovel pass to receiver Jaylen Waddle on a misdirection play that made it 17-3 with 5:10 left in the third quarter.

"Certainly, they played well enough for us to be in this game, which we were for a good majority of it,” Payton said of New Orleans' defense.

Many of the missing players, having tested positive before Friday, are expected to be available against Carolina on Sunday.

That means Book's maiden start could be his only one this season. And as rough as it went, he saw it as something upon which to build.

“I was having fun. I wanted to go out there and bring energy,” Book said. “I could have played a little bit faster, you know, obviously doing some thinking the first time out there.

“I learned a lot already. So, that’s a pretty cool feeling. I’m excited about that," Book added. "It’s about moving on. Don’t hang your head. It didn’t go our way tonight.”