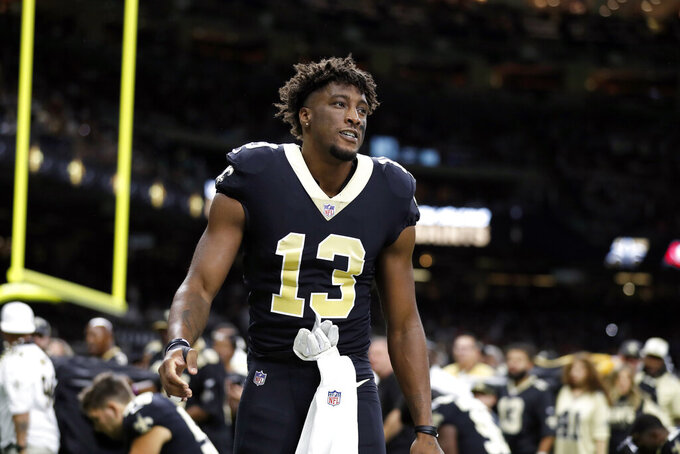 NEW ORLEANS (AP) — The New Orleans Saints had most of the previous two seasons to adjust to playing without two-time All-Pro receiver Michael Thomas.

Now their highest-paid pass catcher is scheduled for toe surgery that is expected to wipe out the rest of yet another season.

The Saints have decided to place Thomas on injured reserve because of a dislocated toe that has not responded well to rehab, coach Dennis Allen said Thursday.

While Allen declined to get into specific time frames for Thomas' recovery, he added, “I don’t anticipate that he’ll be able to return this year."

The decision means Thomas will have missed most of three seasons since his five-year, $96 million extension went into effect in 2020.

After Thomas missed more than half of 2020 and all of 2021 because of an ankle injury and complications related to surgery in the summer 2021, the Saints had hoped the seventh-year pro out of Ohio State would return to his All-Pro form of 2019, when he set an NFL record with 149 catches and finished that season with 1,725 yards and nine touchdowns.

Instead, Thomas played in just three games this season, catching 16 passes for 171 yards and three touchdowns.

“When he's healthy, he's one of the best players in the league — not just receivers,” said Saints rookie wideout Chris Olave, a first-round draft choice out of Ohio State who said he learned a lot from Thomas during training camp and the early weeks of the season.

“I feel bad for him,” Olave added. “Seeing how he works, seeing how he attacks the game, works on his craft, I know he wants to be out there the most.”

Thomas had missed the Saints' past five games, during which the Saints have nonetheless been among the NFL's top 10 in yards per game and scoring.

Allen said Thomas worked hard to rehabilitate the injury in hopes of coming back this season and avoiding surgery.

“It hasn’t healed the way everybody kind of was hoping that it would, so surgery was the next option,” Allen said, adding that Thomas and the team have decided surgery would indeed be best at this time.

Thomas also opted to delay surgery on his ankle after the 2020 season, siding with the opinion of those physicians who told him he could likely recover while avoiding an operation.

But after it was clear that the pace of his recovery was slower than desired, he opted for ankle surgery in the summer of 2021, and a subsequent setback sidelined him that entire season.

Thomas' attempt to avoid surgery on his toe was consistent with how he initially approached coming back from his ankle injury. Unfortunately for the player and the Saints, the result proved consistent as well.

“He's disappointed,” Allen said. “He put a ton into this to try to get himself back and he's been an outstanding teammate. He's worked extremely hard to rebab it. There's just some things you don't have any control over and this is one of those things.”