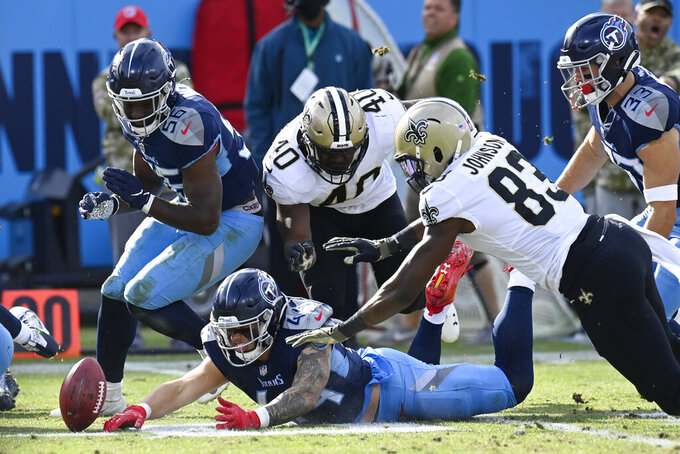 Tennessee Titans fullback Tory Carter (44) reaches for the ball after New Orleans Saints' Deonte Harris, not shown, fumbled a kickoff in the second half of an NFL football game Sunday, Nov. 14, 2021, in Nashville, Tenn. Carter recovered the ball on the play. (AP Photo/Mark Zaleski)

The Saints were fuming over questionable officiating that likely affected the outcome, but they were pleased that even with some key players missing and a pivotal call going against them, they nearly upended the Tennessee Titans, who share the NFL's best record.

“It’s gut-wrenching, if you want to know truthfully," Payton said Monday after reviewing video of the 23-21 setback. “There’s so much that goes into the week. It’s always difficult when you lose and then when you lose in a fashion where — it is what it is — that’s even more difficult, more difficult to accept.”

Still, they had their most productive game of the season passing (287 net yards) while nearly ending a Titans winning streak that now stands at six games.

The disputed officiating decision came when Saints safety Marcus Williams intercepted Ryan Tannehill in the end zone, only to have that play wiped out by a roughing-the-passer penalty against linebacker Kaden Ellis. Ellis appeared to be pulling up and trying to avoid a big hit on Tannehill, and analysts on the network broadcast did not agree with the penalty after viewing replays.

Tennessee capitalized, taking a one-touchdown lead shortly before the half.

“It is just tough to see that," Saints linebacker Pete Werner said after watching video of the play Monday. “Everyone executed really well on that play."

Elliss “did well and he did his job,” Werner concluded. "If that play would’ve been reversed, it would’ve been a different game.”

But the Saints also tripped themselves up.

Brian Johnson missed two extra points. Trevor Siemian took consecutive sacks after the Saints — who were out of timeouts — had a first down on the Tennessee 35 with minute left in the second quarter. That wiped out a field goal opportunity. Deonte Harris fumbled a kickoff return to start the second half, setting up a Tennessee TD.

And when the Saints lined up for a tying 2-point conversion with 1:20 left, tight end Adam Trautman committed a false start penalty, moving the play back 5 yards before it ultimately failed.

“Obviously, the swing in the first half with the interception that was negated was significant,” Payton said. “But we felt, going into the second half, we just wanted this game to be within our reach — and quite honestly, it should have been.

“We did a number of things well. I was encouraged with how we fought in the second half,” Payton continued. “We had some opportunities at the end and we weren’t able to capitalize.”

While the Saints' top-ranked run defense didn't have to face injured star running back Derrick Henry, New Orleans stifled any other Titan who carried the ball. New Orleans held the Titans to 66 yards on 29 carries and did not allow a run longer than 7 yards.

The Saints have been flagged 19 times for 139 yards combined in their past two losses, each decided by two points.

Receiver Tre'Quan Smith, in his third game back from a calf injury that sidelined him for the first six games, had four catches for 44 yards and a touchdown.

“I feel like I’ve been getting better each week — just with the little things basically making all my plays,” Smith said. “Basically, I feel like I’m getting very comfortable back to where I was before I was injured.”

Johnson's two missed extra points were costly, and Payton was not inclined to cite any mitigating circumstances after reviewing video.

“The first one we hit fat; we hit the ground with our foot,” Payton said. "The second one, we pulled it.”

Receiver Ty Montgomery, who also plays running back, appeared to dislocate a finger. The Saints hope to get Kamara and Armstead back within the next week or two. The Saints placed defensive back C.J. Gardner-Johnson and rookie defensive end Payton Turner on injured reserve late last week, meaning they'll miss at least three games each.

8 — The number of consecutive unsuccessful 2-point conversions the Saints have attempted. They also missed a late 2-point attempt in their previous loss to Atlanta. New Orleans' string of missed 2-point tries goes back more than two seasons.

The Saints look to snap their two-game ski when they visit the Philadelphia Eagles on Sunday. New Orleans hasn’t lost three straight since opening the 2016 season 0-3.