Sliding Saints sticking with steady Siemian at QB for now 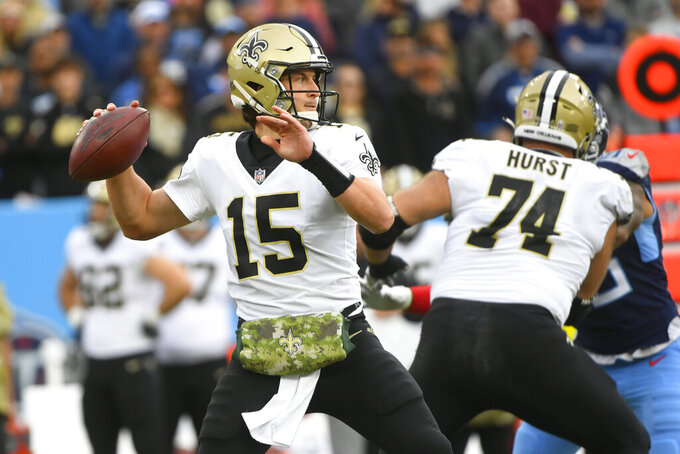 While New Orleans pulled out a victory over NFC South-leading Tampa Bay when Siemian replaced an injured Jameis Winston during the second quarter of a tie game, Siemian's first two starts have been losses.

Both losses came by just two points and plenty went wrong in both games that had little to do with who was throwing the ball.

“Obviously we grade all these plays. We grade how they are playing,” Payton said, adding that it would be simplistic to tie the Saints' recent results to a quarterback change “rather than looking at turnovers or penalties or dropped balls.”

Siemian has not thrown an interception through nearly 11 quarters. His lone turnover came when he was stripped on a blind-side sack — a play on which left tackle Terron Armstead took the blame for getting outmaneuvered by an edge rusher.

“Coming in, especially early, I was focused on taking care of the ball," Siemian said. "With that, you can’t play too cautiously, right? You’ve got to focus on making good, aggressive decisions without putting the ball in harm’s way recklessly.”

In a 23-21 loss at AFC South-leading Tennessee last weekend, Siemian showed signs of doing just that, passing for 298 yards — the most by a Saints QB this season — while throwing for two touchdowns without a turnover.

It might have been enough for a big road win if not for two missed extra point kicks, a fumbled kickoff return and a disputed roughing-the-passer penalty against the Saints defense that negated an interception and allowed the Titans to continue a possession that resulted in a touchdown.

“He never gets flustered,” Smith said. “I’ve never seen him get out of character. You kind of look for that in your quarterback.”

Siemian, now 29, starred at Northwestern before being selected by Denver in the seventh round of the 2015 draft. He was promoted to his first starting role in his second NFL season after Peyton Manning retired.

In 2016, the Broncos were coming off a Super Bowl triumph in Manning's final season and had one of the league's top defenses. Siemian went 8-6 as a starter that year, completing 59.5% of his passes for 3,401 yards and 18 TDs against 10 interceptions. Then next season, he went 5-5 as a starter with 14 interceptions against 12 TDs and in 2018 was traded to Minnesota, where he was a backup and did not play.

Siemian signed with the New York Jets in 2019 and started one early season game because then-Jets starter Sam Darnold was sick. But Siemian injured his ankle in that game and did not take another regular-season snap until three weeks ago.

Payton said the Saints signed Siemian as a third-string quarterback last season because of the potential he showed early in his career.

“We saw him as someone who was real quick and accurate with his decisions,” Payton said. “Those are some of the things initially — his athleticism and the tape we had seen when he was a starter.”

Siemian's journey has allowed him to spend one season each in position group meetings with Manning, a Hall of Famer, and record-setting QB Drew Brees, who retired after last season and likely will end up in the Hall of Fame as well.

While Siemian said he'll never play quite like either of them, “There’s so many things that you pick up, especially from those two guys.”

Winston and Taysom Hill competed for the starting job during training camp. Once Winston won that job, Hill reverted to more of his utility role as not just a change-of-pace option QB, but also as a receiving tight end and an up-back on the punt team. That meant that if Winston had to leave a game, Siemian would take his snaps while Hill would continue in his multiple-position role.

That's what happened against Tampa Bay, when Winston had a season-ending knee injury, and Payton has decided to stick with Siemian as the starter, for now. His next test comes at Philadelphia on Sunday.