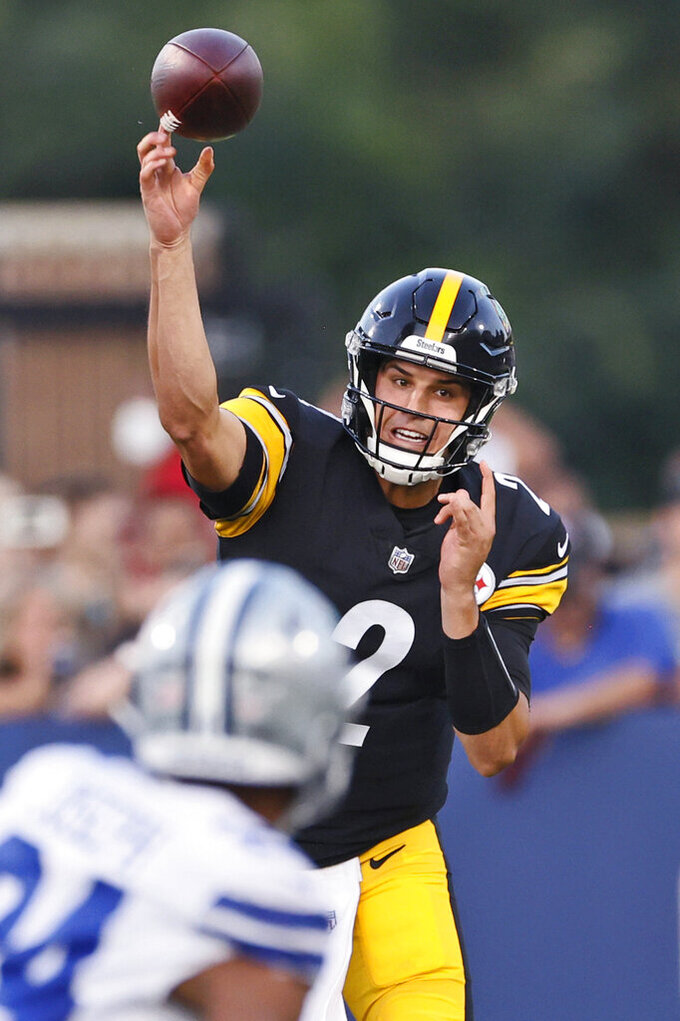 PITTSBURGH (AP) — Pittsburgh Steelers coach Mike Tomlin liked what he saw from his three backup quarterbacks during the Hall of Fame game on Thursday.

Starter Ben Roethlisberger had the night off, giving way to Mason Rudolph, who has been entrenched as the team’s backup for the past three seasons. Dwayne Haskins, Washington’s 2019 first-round pick, made his debut with Pittsburgh, while Josh Dobbs played most of the fourth quarter.

All three had their moments during the Steelers’ win against the Dallas Cowboys on Thursday.

“Largely, I thought all of their performances were positive,” Tomlin said. “That’s why we were excited about participating in this game. We’re going to particularly use that as an added opportunity to gain some exposure to these quarterbacks.”

Rudolph finished 6 of 9 for 84 yards, while Haskins played most of the game. Haskins ended 8 of 13 for 54 yards and he led the Steelers to a pair of scoring drives, while Dobbs went 4 of 6 for 37 yards and threw a touchdown.

Rudolph connected with Chase Claypool for a 45-yard diving catch on third-and-5 during a second-quarter drive that resulted in a missed field goal. But Rudolph and Claypool weren’t on the same page during a fumble that stalled the Steelers’ first drive of the game.

“We’ve got to finish drives, we’ve got to put more points on the board, but I thought the overall quality of the work was where we want it to be,” Rudolph said. “I thought outside of a couple plays – obviously the botched handoff there on the sweep – the guys made plays.”

Haskins wants to put a forgettable run with Washington in the past. The Steelers signed Haskins to a futures contract in January, giving the former Ohio State quarterback a chance after he flamed out in the nation’s capital less than two seasons after he was taken with the 15th pick in the 2019 draft.

Haskins said he wants to push Rudolph for the backup spot behind Roethlisberger.

“I’ve been told certain things, and that’s between me and the coaches,” Haskins said. “I feel like I have to go out there and prove that I can play.”

Haskins later led the Steelers on a nine-play, 14-yard series that ended with a field goal.

“I liked his demeanor,” Tomlin said of Haskins. “I thought he was a really good communicator. I thought he was present and kind of cerebral, the way that you like the quarterback position to be. But there’s so much ball in front of (Haskins) and the others.”

The Steelers selected Dobbs in the fourth round of the 2017 draft. Dobbs enjoyed a strong preseason in 2018, as Pittsburgh opted to keep Dobbs and Rudolph, a rookie at the time, over veteran Landry Jones as the primary backup quarterbacks behind Roethlisberger.

The Steelers traded Dobbs to Jacksonville for a fifth-round pick in 2019, but claimed the former Tennessee product off waivers prior to the 2020 season.

Dobbs led the Steelers to a touchdown during his first series on Thursday. Dobbs opened the seven-play, 32-yard series with a 17-yard completion to Trey Edmunds, and he closed it with a 5-yard touchdown throw to Tyler Simmons on third-and-goal.

“He’s been with us before and performed similarly when given an opportunity,” Tomlin said. “This guy’s not going to back down from the competition. You guys keep asking me about Rudolph and Haskins … we were in a training camp setting a number of years ago and it was Jones and Rudolph and Dobbs, and nobody was asking me about Dobbs, and he came out of it.”