Texans looking ahead after latest loss extends skid to 7 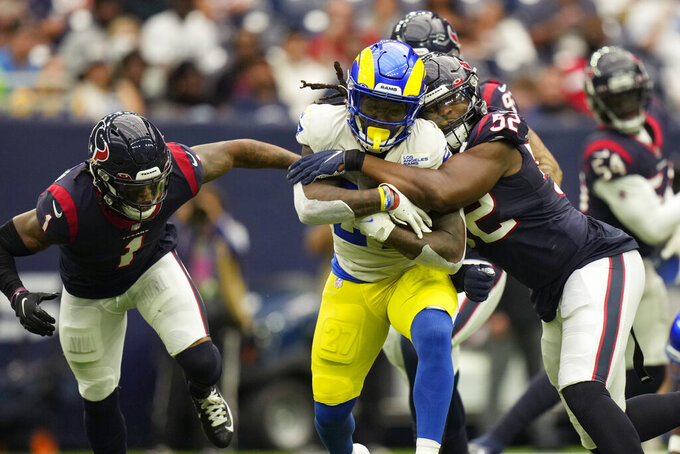 Los Angeles Rams running back Darrell Henderson, center, is hit by Houston Texans defensive end Jonathan Greenard (52) on a run during the first half of an NFL football game, Sunday, Oct. 31, 2021, in Houston. (AP Photo/Eric Smith)

HOUSTON (AP) — After another embarrassing loss extended Houston’s skid to seven games Sunday, the Texans are focused on trying to keep the season from spiraling further out of control.

“It can always get worse,” defensive lineman Jonathan Greenard said. “So that’s the thing ... we’ve got to have in the back of our head.”

It's already quite bad. The Texans fell behind 38-0 against the Rams, who pulled quarterback Matthew Stafford for his backup before Houston scored in the 38-22 loss.

Houston’s seven-game losing streak is the team’s longest since dropping the final 14 games of the 2013 season.

In short, nothing is going right.

It’s easy to blame rookie quarterback Davis Mills for the team’s woes, as he’s struggled mightily since taking over for Tyrod Taylor at halftime in Week 2. But coach David Culley was adamant there isn’t one player or coach who doesn’t carry blame.

Mills fell to 0-6 Sunday in what could have been his last chance to get a win this season with Taylor moving closer to getting back on the field. The veteran, who has a hamstring injury, was at practice last week and could finally return Sunday against the Dolphins.

There’s plenty to pick from here, but Houston’s running game is in desperate need of improvement after gaining just 44 yards Sunday in the first game since Mark Ingram was traded to the Saints. The Texans are averaging just 76.1 yards rushing this season. They need David Johnson and Phillip Lindsay to step up if they hope to improve; neither player has had more than 25 yards rushing in a game this season.

Greenard has been a bright spot for the Texans this season. His sack Sunday gives him seven this season, which is tied for seventh in the NFL. It was his fourth straight game with at least one sack, and his six sacks in October were the most in franchise history for that month.

Offensive coordinator Tim Kelly’s unit couldn’t get anything going through the first three quarters Sunday. Houston punted on seven of its first nine possessions and the other two ended with an interception and a missed field goal.

TE Pharaoh Brown injured his thigh against the Rams and could miss Sunday’s game. ... Culley said LT Laremy Tunsil, who had thumb surgery Oct. 13, is nearing a return.

7 — The Texans opened as seven-point underdogs to Miami, a fellow 1-7 team, according to FanDuel Sportsbook.

Culley believes if he and the rest of the staff remain consistent, the Texans will find a way to end their skid and get back in the win column.

“Is it frustrating? Yes, it’s frustrating, but the message does not change,” Culley said. “We forget about what happened in the past. It’s all about moving forward.”