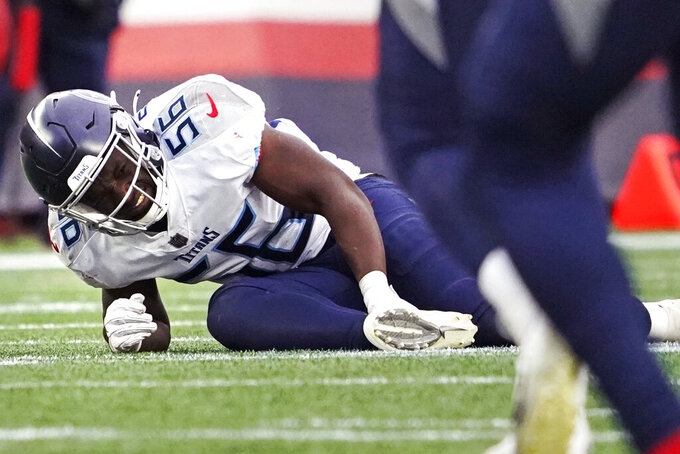 Tennessee Titans outside linebacker Monty Rice (56) reacts after an apparent injury during the first half of an NFL football game against the New England Patriots, Sunday, Nov. 28, 2021, in Foxborough, Mass. (AP Photo/Mary Schwalm)

NASHVILLE, Tenn. (AP) — The Tennessee Titans have added rookie linebacker Monty Rice to an injured reserve list now at 18 with the team at its bye.

Rice hurt his right ankle in last week's 36-13 loss to the Patriots. He was helped off the field in the second quarter and didn't return. The third-round pick out of Georgia has started four of 10 games played this season with injuries to fellow linebackers Jayon Brown, David Long Jr. and Rashaan Evans.

The rookie is the 18th player currently on injured reserve. Brown is among 12 who've returned from injured reserve, though running back and Darrynton Evans and receiver Marcus Johnson are out for the season after going on that list for the second time.