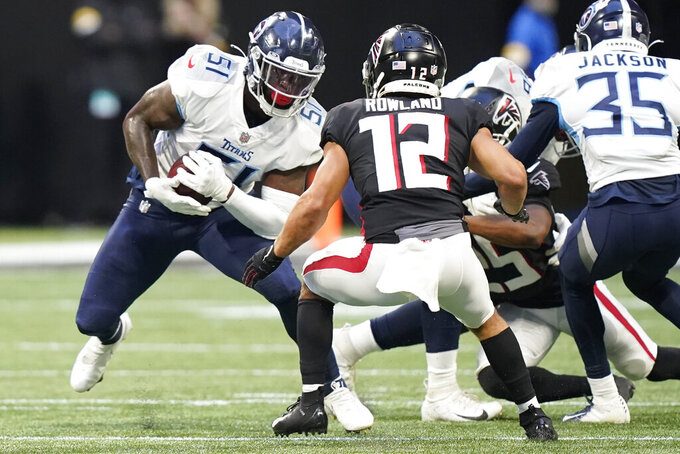 Tennessee Titans linebacker David Long (51) runs the ball after an interception against the Atlanta Falcons during the first half of a preseason NFL football game, Friday, Aug. 13, 2021, in Atlanta. (AP Photo/Brynn Anderson)

NASHVILLE, Tenn. (AP) — Being better on defense shouldn't be that challenging for the Tennessee Titans following a season where it would be tough to be much worse.

After their preseason opener, the Titans look like a completely different unit after an offseason makeover.

Even without outside linebacker Bud Dupree, their top free-agent signee, and top draft pick cornerback Caleb Farley, the Titans did more than just pressure the quarterback while getting off the field on third down. They smothered the Atlanta Falcons in a 23-3 win Friday night featuring backups for much of the game.

"We have a standard on our football team that we try to live to, a certain way we want to play in all three phases, and defensively they did that,” coach Mike Vrabel said Saturday.

The Titans played only three starters from last year's defense, with safety Kevin Byard playing five snaps, linebackers Rashaan Evans in for six and Jayon Brown for nine before heading to the bench.

The defense featured a handful of the players Tennessee hopes will fix some of the issues from last season: Jackrabbit Jenkins started at cornerback with Amani Hooker, a fourth-round pick in 2019, at safety and Kristian Fulton, a 2020 second-round pick out of LSU, at cornerback.

Even with Atlanta starting A.J. McCarron at quarterback instead of Matt Ryan, differences on defense were easy to see even as the Titans didn't tap the defensive playbook, instead letting players just play.

Tennessee not only was worst in the NFL at getting off the field on third downs last season (51.8%), it was the league’s worst in that category in years. Yet the Titans held the Falcons to 2 of 12 (16.7%) on third down.

The Titans ranked dead last in the NFL in sacks until the regular season finale when they piled up enough sacks to finish ahead of Jacksonville and Cincinnati in that category. Against Atlanta, the Titans had five sacks.

Rookie linebacker Rashad Weaver, a fourth-round pick out of Pittsburgh, helped lead the defense with 1 1/2 sacks. He also had two hits on the quarterback and a tackle for loss.

Vrabel did notice some tackling issues.

“Missed tackles, guys leaving their feet. But they did fly around. They were productive. We got our hands on some footballs,” Vrabel said. “These rushers finished when they realized which quarterback was in the game finally and started, you know, not running by the quarterback and being able to control them.”

Overall, the Titans' backups held Atlanta to just 138 yards total offense after giving up 398.3 yards a game in 2020, and the Titans didn't allow a drive longer than five plays until the second half.

“David has had a really good camp," Vrabel said. “You see how comfortable he is. He’s developing a role.”

NOTES: Vrabel said backup RB Darrynton Evans (knee) is day-to-day after leaving the game in the first quarter. K Tucker McCann is “sore” after having his right, kicking ankle rolled up on a roughing the kicker penalty. ... Rookie WR Dez Fitzpatrick, a fourth-round pick out of Louisville, needs to show “a lot more,” according to Vrabel. ... The Titans, whose headquarters is under construction, will hold their lone open practice for fans in Nashville on Monday before traveling to Tampa Bay for joint practices and a game with the Bucs.