Titans' Henry will have surgery, no timetable for return 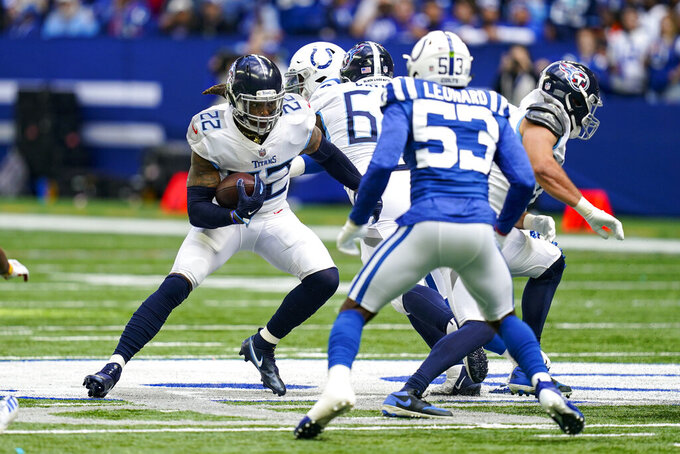 Tennessee Titans running back Derrick Henry (22) cuts away from Indianapolis Colts outside linebacker Darius Leonard (53) in the first half of an NFL football game in Indianapolis, Sunday, Oct. 31, 2021. (AP Photo/Darron Cummings)

NASHVILLE, Tenn. (AP) — NFL rushing leader Derrick Henry will have surgery Tuesday morning on his right foot, and coach Mike Vrabel says the Tennessee Titans are not putting a timeline on when he will return.

Henry had tests Monday to check the severity of the injury after he finished a 34-31 overtime win in Indianapolis. The Titans placed Henry on injured reserve Monday afternoon.

Vrabel said he knows Henry will do everything possible to work himself back to help the Titans (6-2). Vrabel said doctors will put a timeline on Henry's recovery and possible return but he won't necessarily listen to that.

The Titans have nine games remaining this season including their bye Dec. 2. The defending AFC South champs hold a three-game lead and the tiebreaker inside their division.

The two-time NFL rushing champ went to the bench early in Sunday's game. He was shown on TV with his shoe off talking with trainers with 6:03 left in the first quarter before he returned. Henry finished with 28 carries for 68 yards and a 2.4-yard average that was his lowest this season. He played 54 of the 73 offensive snaps.

The 2020 AP NFL Offensive Player of the Year did not talk to reporters after the game.

Vrabel said he thought about shutting Henry down Sunday. But he checked with the medical staff and Henry. The coach says he gives Henry a little leeway, believing the two-time Pro Bowl running back has earned the right to help make that decision.

“There was no indication that he would make anything worse,” Vrabel said.

Henry leads the NFL with 937 yards rushing and 10 touchdowns. He also has a league-high 219 rushes, well ahead of the next leading rusher Joe Mixon of Cincinnati (137). Henry was one off his career high with 18 receptions for 154 yards, and he threw his first TD pass in the regular season last week against the Chiefs.

He is the biggest reason why the Titans currently sit atop the AFC as the No. 1 seed having won four in a row.

“If anybody can I guess come back, it would be Derrick,” Vrabel said, "but not going to put any expectations on any sort of timeline.”

The Titans have relied heavily on Henry since he took over as the starting running back, and he had been carrying Tennessee this season. He reached 10 TD runs through six games, and it took Ryan Tannehill throwing three TD passes Sunday against the Colts to reach 10 TDs this season.

The Titans visit the Los Angeles Rams (7-1) on Sunday night, and now they have to look for more help at running back.

The depth chart behind Henry already was thin with the Titans putting Darrynton Evans, their third-round pick in 2020, back on injured reserve last Friday. That leaves just Jeremy McNichols and fullback Khari Blasingame with Mekhi Sargent and Dontrell Hillard on the practice squad.

The Titans were finalizing a deal on Monday to sign 2012 MVP and four-time All-Pro Adrian Peterson to the practice squad with plans to promote the 36-year-old running back to the active roster, according to a person with direct knowledge of discussions. The person spoke to The Associated Press on terms of anonymity because the Titans have not announced any deal with Peterson.

“We’ve played against Adrian, and you know obviously he's got a pretty strong and solid resume," Vrabel said when asked if the Titans would work out Peterson.