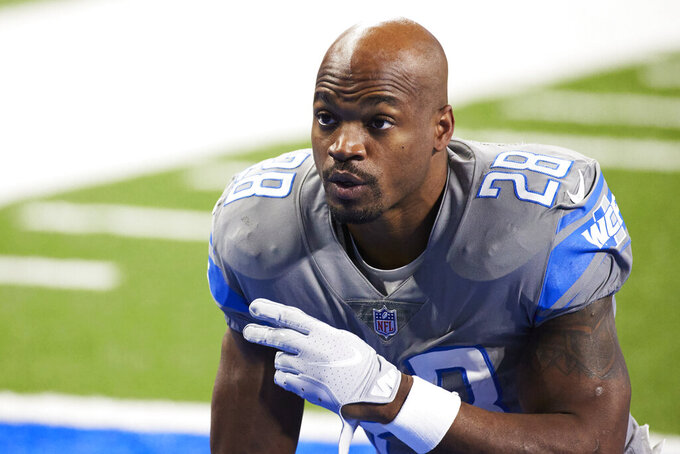 FILE - Detroit Lions running back Adrian Peterson (28) is seen during an NFL football game against the Tampa Bay Buccaneers, Saturday, Dec. 26, 2020, in Detroit. The Tennessee Titans have signed 2012 NFL MVP and four-time All-Pro running back Adrian Peterson to help replace NFL rushing leader Derrick Henry. The Titans signed Peterson on Tuesday, Nov. 2, 2021, to the practice squad with Peterson, 36, not having been with an NFL team this season.(AP Photo/Rick Osentoski, File)

The Titans announced Tuesday they signed Peterson to the practice squad. This is the sixth NFL team for Peterson, 36, who had been unsigned since finishing last season with Detroit. Tennessee plans to add him to the active roster with the Titans (6-2) visiting the Los Angeles Rams (7-1) on Sunday night.

Running backs coach Tony Dews said Peterson obviously has been a great player and will be in the Pro Football Hall of Fame some day. Dews said he will need to see Peterson on the field to gauge what shape the running back is in.

“My job is just to get him up to speed and whatever he can do to help the team, that's my job to try to figure that out and help him out along the way," Dews said Tuesday. "Obviously, he'll go out and do what he does best.”

Henry was scheduled for surgery Tuesday for his injured right foot. The Titans placed him on injured reserve Monday.

Tennessee also signed running back D'Onta Foreman and two others to the practice squad.

Peterson is the running back who most resembles Henry, at least in production. Peterson is a seven-time Pro Bowl running back. He led the NFL in rushing three different seasons, the last in 2015. He also is one of only eight players in NFL history to run for at least 2,000 yards in a season.

Peterson ranks fifth all time in the NFL with 14,820 yards rushing, trailing Emmitt Smith, Walter Payton, Frank Gore and Barry Sanders. He also holds the single-game rushing mark with 296 yards in 2007 against the Chargers. That was Peterson's first Pro Bowl nod, also when his new coach Mike Vrabel earned his lone Pro Bowl berth at linebacker.

Foreman also is a bigger running back at 6-1 and 236 pounds. He played six games last season with the Titans and ran 22 times for 95 yards. A third-round pick by Houston in 2017, he has played in 17 career games with 421 yards rushing and two TDs.