Baker Mayfield 'ready to move on' from Browns 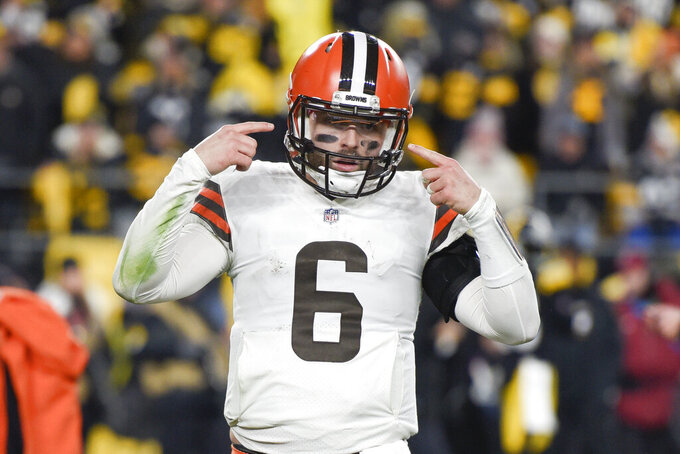 FILE - Cleveland Browns quarterback Baker Mayfield (6) gestures during the second half an NFL football game against the Pittsburgh Steelers, Monday, Jan. 3, 2022, in Pittsburgh. Baker Mayfield said the Cleveland Browns have work ahead if they want him to help them through their situation with Deshaun Watson. Mayfield, speaking at his football camp near the University of Oklahoma’s campus on Tuesday, June 28, didn’t entirely close the door on stepping in if needed.(AP Photo/Don Wright, File)

NORMAN, Okla. (AP) — Baker Mayfield said the Cleveland Browns have work ahead if they want him to help them through their situation with Deshaun Watson.

Mayfield, speaking at his football camp near the University of Oklahoma’s campus on Tuesday, didn’t entirely close the door on stepping in if needed.

“No, I think for that to happen, there would have to be some reaching out,” Mayfield said. “But we’re ready to move on, I think, on both sides.”

The Browns made a major trade for Watson in March and then signed him to a record-setting $230 million contract.

Now, Watson faces a possible suspension from the league stemming from accusations of sexual misconduct by two dozen massage therapists in Texas.

Former U.S. District Judge Sue Robinson, who was jointly appointed by the NFL and the NFL Players’ Association, will hold a hearing to determine whether Watson violated the NFL’s personal conduct policy and whether to impose discipline.

Mayfield said he expected to be traded before the NFL draft, but he’s still on the team roughly a month before the opening of training camps.

“I think I got frustrated with it not happening before minicamp and all those things, but it’s just the stuff that’s out of my control,” he said. “And so, you know, let those things happen and fall in place.”

Mayfield said he’s been working out with veteran receivers Danny Amendola and Cole Beasley and some others from the area near Lake Travis in Texas. He said that work gets his mind off the situation.

“You know, obviously if I was focused on not having a team and not being able to (prepare with a team), it’d be pretty miserable,” he said. “But I’m just working on getting better for myself. And then whenever this all happens, then learn a playbook and get the guys down as soon as possible.”

In the 2020 season, Mayfield led the Browns to a wild-card win at Pittsburgh for the franchise’s first playoff win in a quarter century. Cleveland then lost a close game at Kansas City in the divisional playoffs, fueling hopes that Mayfield could take them further in the coming seasons.

Instead, Mayfield tore the labrum in his left, non-throwing shoulder. He played through it, but struggled, and the Browns missed the playoffs with a 8-9 record.

He said the shoulder is better.

“Can swing a golf club too hard, so it’s going pretty good,” he joked.

Even while still on the roster, he spoke as though his days with the Browns were coming to an end.

“I’m thankful for my four years in Cleveland, and had a lot of ups and downs and a ton of learning experiences that I will forever keep with me,” he said.