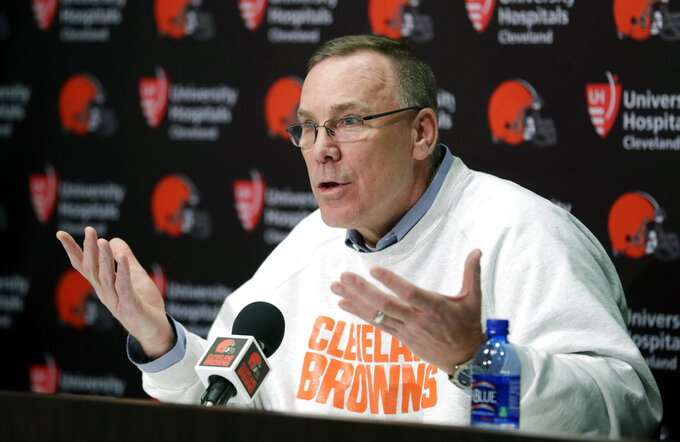 CLEVELAND (AP) — Gregg Williams showed the Browns what he could do as their coach for a half-season.

On Tuesday, he shared his plans for a full one — and maybe more.

Williams, who led Cleveland to a 5-3 record as an interim coach, became the first candidate to interview with general manager John Dorsey, who is looking for a "man of character" to lead one of the NFL's rising teams.

Williams had an impressive run after he replaced a fired Hue Jackson on Oct. 29. The Browns remained focused and played as well as they have in several years under the 60-year-old Williams, who has served for the past two seasons as the team's defensive coordinator.

Dorsey said Monday he was interested in hearing Williams' long-term vision with the Browns. Williams didn't publicly campaign for the job during the closing weeks of the season, but several players said they would be fine if he returned.

"He had a clear message," left guard Joel Bitonio said as the Browns cleared out their lockers following the biggest turnaround season in club history. "He was concise, clear message, but we were all on the same page. We knew what he wanted, we knew what we were going to get from him and that's all you can really ask for in a coach."

Williams took over from Jackson, finally dismissed after winning just three of 40 games in two-plus seasons.

Even if he doesn't get hired by the Browns, Williams could draw interest by one of the other teams seeking a coach. Williams coached in Buffalo from 2001-03, going 17-31 in three seasons. He won a Super Bowl as a defensive coordinator in New Orleans.

Dorsey is casting a wide net as the Browns look for their ninth coach since 1999.

It's also probable that Dorsey will meet with former Green Bay coach Mike McCarthy. The pair spent seven years together with the Packers.

Dorsey said he is committed to a "thorough" and "deliberate" search.

One coach to cross off Dorsey's list is Oklahoma's Lincoln Riley. He has agreed to a contract extension with the school, ending speculation he might rejoin Mayfield in the pros.