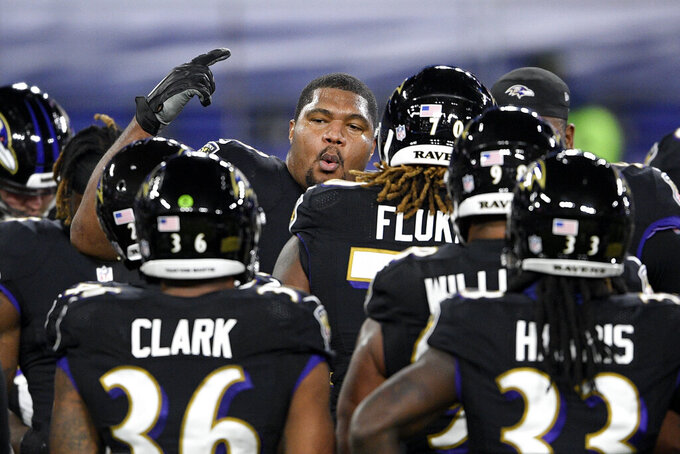 Baltimore Ravens defensive end Calais Campbell, center, leads a huddle with teammates after working out prior to an NFL football game against the Dallas Cowboys, Tuesday, Dec. 8, 2020, in Baltimore. (AP Photo/Nick Wass)

The award first created in 2014 is given each year to an NFL player best demonstrating on-field sportsmanship with fair play, respecting the game and opponents and integrity in competition.

Finalists include four players from each conference and were picked by a panel of former players from the NFL Legends Community featuring Warrick Dunn, Curtis Martin, Karl Mecklenberg and Leonard Wheeler.

The finalists will be listed on the Pro Bowl ballot under the NFL Sportsmanship Award category. Teams can't vote for their own player.

“You want guys who display leadership, who go above and beyond, who think about their teammates before they think about themselves," Dunn said. "It is always hard to narrow down the list of individuals for this award.”

The award was created to honor the founding owner of the Pittsburgh Steelers, Pro Football Hall of Famer Art Rooney Sr.