Column: More normality from NFL. Will it happen on time? 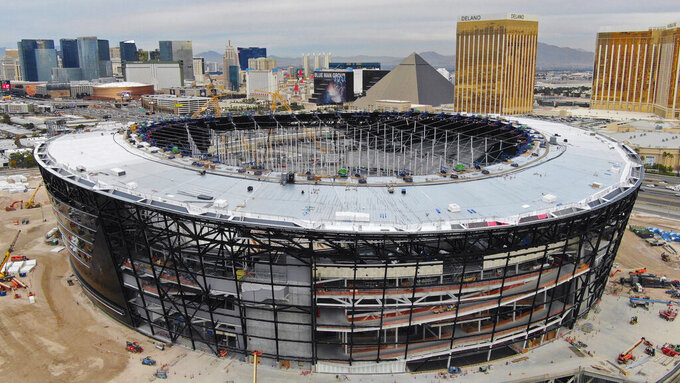 The Super Bowl champions kicking off the season at home.

Free agency pretty much went routinely. The draft, done virtually, was a massive hit with huge TV and streaming audiences. And on Thursday night, America got the league's schedule, from the Chiefs hosting the Texans on Thursday night, Sept. 10, to start it all off, to the usual Turkey Day games in Detroit and Dallas — and the fierce Baltimore-Pittsburgh rivalry at night — to the yearly slate of divisional games in Week 17.

Business as usual, and you really can't blame the NFL for that.

Thankfully, the league recognizes it is making plans that could be erased at any time.

“The release of the NFL schedule is something our fans eagerly anticipate every year, as they look forward with hope and optimism to the season ahead,” Commissioner Roger Goodell said.

“In preparing to play the season as scheduled, we will continue to make our decisions based on the latest medical and public health advice, in compliance with government regulations, and with appropriate safety protocols to protect the health of our fans, players, club and league personnel, and our communities.

"We will be prepared to make adjustments as necessary, as we have during this offseason in safely and efficiently conducting key activities such as free agency, the virtual offseason program, and the 2020 NFL draft.”

Naturally, in the midst of the coronavirus pandemic, there must be heavy concerns mixed with the hope and optimism.

As baseball is experiencing now, nobody can be sure when its season will begin. The NHL has no idea if the Stanley Cup will be paraded around a rink. Three of golf's four majors have been delayed and the Open Championship canceled.

Even the Tokyo Olympics were postponed a year.

So yes, while a fun endeavor to see who is playing whom and when, the release of the NFL schedule could wind up a futile exercise.

“I just think for us it doesn’t make sense to play any games unless it is completely, 100 percent safe for us to go out there," Broncos safety Kareem Jackson said.

“If there is any threat to us being able to contract COVID of any way and spread it to our families or anybody else that we’re around, it just doesn’t make sense. I think I heard them saying something about us playing with no fans and all that. That will be like practice. In my opinion that would (stink).”

There are so many unanswerable questions at this time regarding a 2020 season. Would the NFL indeed stage games without fans? Would it consider a shortened season? How far back in the calendar, including 2021, might the schedule, the playoffs and the Super Bowl (currently on Feb. 7 in Tampa) be pushed?

How much pressure will the league's broadcast partners put on Goodell and the owners to provide the product that in many ways is their financial lifeblood? And if the games can't be played in certain states or cities ...

“It’s difficult to imagine stadiums filled until we have immunity, until we have a vaccine," California Gov. Gavin Newsom said. “It’s difficult for me to imagine what the league, broadly leagues, do when one or two of their key personnel or players are tested positive. Do they quarantine the rest of the team? If an offensive lineman is practicing with a defensive lineman, and they tested positive, what happens to the rest of the line? What happens for the game coming up the next weekend? It’s inconceivable to me that that’s not a likely scenario ...”

Hopefully it is not, but Newsom makes a salient point, even as the Rams are slated to open SoFi Stadium in a Sunday night game with Dallas on Sept. 13. The Raiders make their Las Vegas debut eight nights later against the Saints.

Fans want to hear none of this. They want to dive deeply into their team's schedule. They know that seven clubs have five prime-time games, with the Ravens and Patriots each having three in a row.

They see that the Dolphins, Titans and 49ers have three straight home contests in 2020, while the Saints, Patriots and Redskins each have three consecutive road games.

Somehow, the Cardinals get both: visits to the Panthers, Jets and Cowboys followed by hosting Seattle, Miami and Buffalo — with a bye mixed in.

Sure, it's a kick to conduct such examinations of the schedule. It makes sense for fans.

Expecting it to all come off as planned might not make much sense.

1 minute ago
an hour ago
4 hrs ago
By The Associated Press 4 hrs ago
By Brandon C. Williams 3 hrs ago