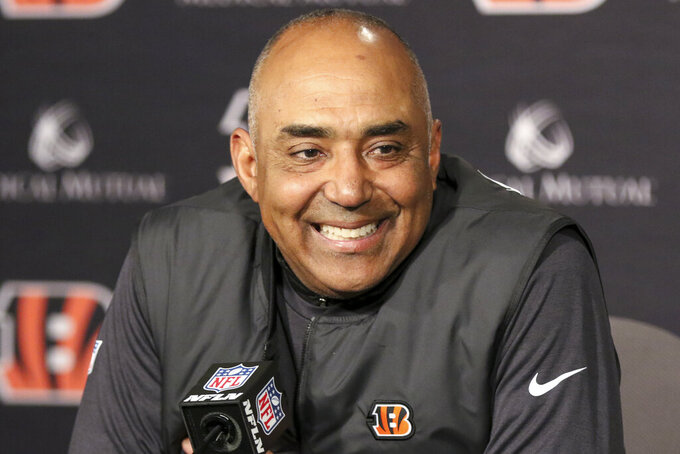 The 62-year-old Lewis is the second known candidate with whom the Jets have completed a video interview. The team also spoke to Kansas City Chiefs offensive coordinator Eric Bieniemy on Wednesday.

General manager Joe Douglas said earlier this week that the Jets would “cast a very wide net” in their search for a new coach after firing Adam Gase on Sunday night after two seasons. New York has asked for permission to speak to several more candidates, so this is just the beginning of what will be a comprehensive process for the team that has the NFL's longest playoff drought at 10 seasons.

Lewis led the Bengals to the postseason seven times, including five straight years, as coach from 2003-18 and has a 131-129-3 regular-season mark. His biggest shortcoming in Cincinnati was being unable to advance past the first round as the Bengals were 0-7 under Lewis in the playoffs.

But Lewis was able to keep the Bengals in the postseason mix, something the Jets are looking to at least do after going 2-14 this season and 9-23 under Gase in two years. New York's last playoff appearance came during the 2010 season under Rex Ryan.

Lewis has a lengthy coaching resume, which began in 1981 as Idaho State's linebackers coach. That was followed by stints as an assistant at Long Beach State, New Mexico and the University of Pittsburgh before he got his first NFL gig as the Steelers' linebackers coach under Bill Cowher.

Lewis became Baltimore's defensive coordinator in 1996, overseeing the Ravens' shutdown defense in 2000 when they won the Super Bow. He remained in that position for six years — including two when Douglas worked in the Ravens' scouting department — before moving to Washington to serve in that same role and as assistant head coach under Steve Spurrier in 2002. He was hired by the Bengals the following season and led them to four AFC North titles. Lewis was also voted the AP NFL Coach of the Year in 2009.

He was hired by Edwards as a special adviser in 2019 and promoted to co-defensive coordinator with former Giants linebacker Antonio Pierce last year.