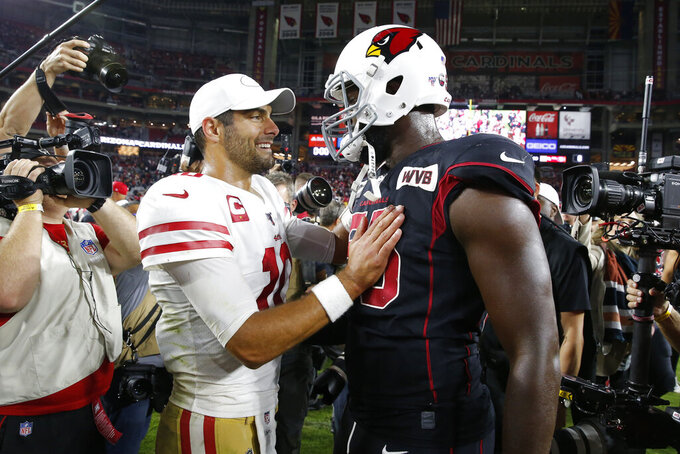 Chandler Jones was a one-man wrecking crew for the Cardinals last season, finishing with a career-high 19 sacks and leading the NFL with eight forced fumbles.

The 30-year-old linebacker and two-time All-Pro is clearly one of the league's best defensive players. He's also proof that one man — no matter how good — isn't enough to build an elite defense.

Even with Jones disrupting multiple plays per game, Arizona's defense was among the worst in the NFL. It's the biggest reason the Cardinals finished with a 5-10-1 record despite a roster that had an entertaining and productive offense led by rookie quarterback Kyler Murray.

So the mission for the Cardinals during the offseason was clear: Get Jones some help.

After a few months of work by the front office, the star linebacker is clearly impressed.

The Cardinals' defensive overhaul began during free agency when the team added linebackers Devon Kennard and De'Vondre Campbell along with defensive lineman Jordan Phillips. All three were productive last season and expect to compete for a starting job.

Then Arizona added Isaiah Simmons in the first round of the NFL draft after he fell to the No. 8 pick. Simmons played all over the field during a stellar college career at Clemson and Jones said he's excited about playing with such a versatile teammate.

Jones praised second-year defensive coordinator Vance Joseph for his teaching ability and said Simmons should be able to make a quick adjustment to the NFL.

“Watching guys like (Simmons), you can't not draft him,” Jones said. “I'm surprised that he fell to us honestly. He's the kind of guy that you can't compare him to anyone. He's a player who can play anywhere. I thought he was a pass rusher and then I turn on the film and this guy's covering guys, interceptions. The sky's the limit for him.”

In the later rounds of the draft, the Cardinals added defensive linemen Leki Fotu and Rashard Lawrence, along with linebacker Evan Weaver.

Jones is hoping he gets a chance to see all the pieces on the field in the near future. Just like every team in the NFL, the Cardinals are having to conduct virtual meetings during the coronavirus pandemic that's stretched more than two months.

He's stayed busy in the interim, even completing the final three credit hours that he needed to graduate from Syracuse with a degree in human development and family science.