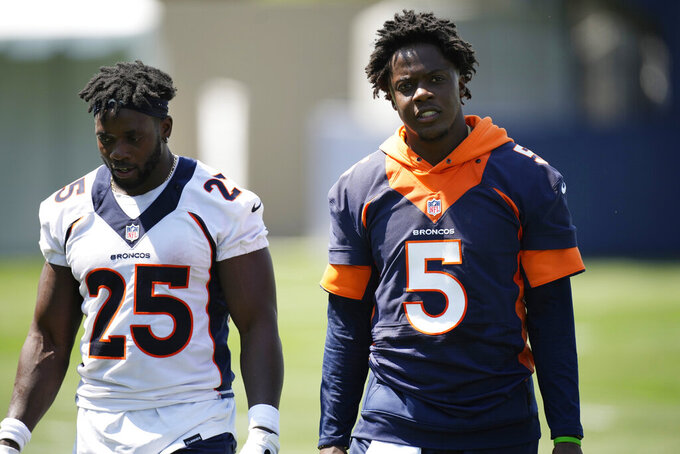 ENGLEWOOD, Colo. (AP) — Drew Lock took the first snap of training camp Wednesday, which might be the only concession the Denver Broncos make to their incumbent quarterback in his training camp competition with veteran Teddy Bridgewater.

Coach Vic Fangio said Lock got the nod on Day 1 because “he's got more seniority with the Broncos, I guess. It's really no big deal.”

Fangio plans to split the snaps about evenly and hopes to give each of his QBs a start in the preseason. The Broncos insist they don't have a date in mind to name their starter, although they'd prefer it doesn't drag on too long.

“Just me personally, I don’t think you put a deadline on it,” said GM George Paton, who traded for Bridgewater just before the draft. "You’d hope to see some separation as we get into Minnesota with the scrimmages (in mid-August) and we play some games.

"I know it’s tricky and they both need the reps. I wouldn’t put a timeframe on it. I think it needs to just happen organically, and again, that’s up to Vic and his coaches.”

Fangio said, "We’re like everybody else. We want it to define itself quickly — sooner rather than later — but we’re going to let the process play itself out.”

One thing to keep in mind is that whichever QB is working with the starting offense vs. the backup defense should outshine the other, who’s working with backups against Denver’s stout defense.

Asked how that should be weighted in the evaluation, Bridgewater said, “That’s a good question. But I leave that one to the coaches and the decision-makers. But it’s all about maximizing the reps and getting your unit to the end zone. And moving the ball and being efficient whether you’re with the 2s, the 3s, if you’ve got to throw to the equipment managers, the folks serving us food in the cafeteria, you just want to be efficient.”

Both of them were efficient as training camp opened in front of a crowd of less than 1,000 fans a year after crowds were prohibited from attending camp because of the coronavirus.

Lock completed 5 of 7 passes and Bridgewater misfired his first throw before completing his next eight. Both had nice completions to Jerry Jeudy.

“It was good," Fangio said. “I'd prefer to watch the tape first to give you a better answer but from my point of view out there, I thought they both did well.”

This is Bridgewater's fourth team in eight NFL seasons and third in the last three. Asked what gives him confidence he's in Denver for the long haul, he said, "I'm a survivor. You can throw me in the jungle and I'll come out with a fur coat and a headband that I made out of some leaves.

“I feel it's just about surviving at this point.”

Ditto for Lock, who led the league with 15 interceptions in 13 games last year, and finds himself fighting to keep his starting job.

“If anything, I'd say it's motivating,” Lock said. "My idea is just to come out with high energy every single day, focus on me, make the plays when they come to me when I'm in there, congratulate Teddy when he makes a good play and we'll talk about when I make a bad play or he makes a bad play.

“It's just about getting better every single day and kind of staying in my lane and helping this team get better every single day,” Lock added. "Because the main goal, besides this competition, is for us to start winning games here. And I think we can do that with this team that we have. There's just a different feeling around this building now. It's really fun to be a part of.”