Patriots looking up at Dolphins in standings for a change 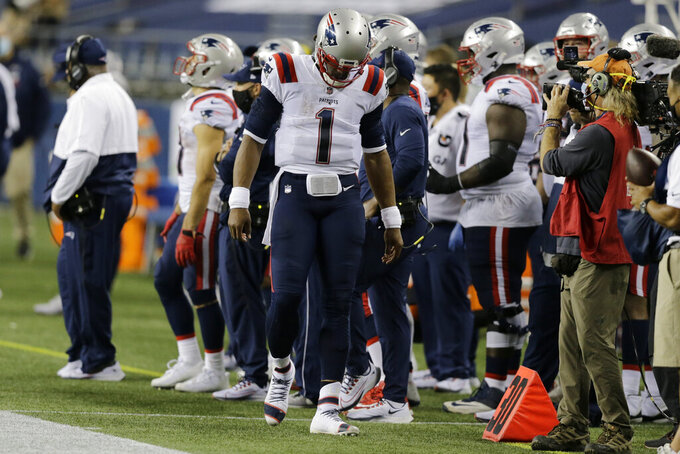 FILE - New England Patriots quarterback Cam Newton (1) reacts on the sideline during the fourth quarter of an NFL football game against the Seattle Seahawks in Seattle, in this Sunday, Sept. 20, 2020, file photo. The Seahawks won 35-30. The Patriots (6-7) play the Miami Dolphins (8-5) on Sunday. (AP Photo/John Froschauer, File)

Even five time zones away in Hawaii, where Tua Tagovailoa grew up following football and dreaming of an NFL career, the New England Patriots left an impression he can describe with just one word.

No more. Mediocre is more like it in 2020, the first year of New England's post-Tom Brady era.

The Patriots (6-7) head into Sunday’s game against the Dolphins and Tagovailoa with their NFL-record run of 11 consecutive playoff appearances in dire jeopardy, and their reign atop the AFC East at an end.

For a change, the Patriots are looking up in the December standings at the Dolphins (8-5), who need a win to bolster their chances to reach the playoffs for the first time since 2016.

“At this point in time, this is our most important game,” Tagovailoa said.

The rookie quarterback, 4-2 as a starter, will face the Patriots for the first time.

Miami and New England head into their 111th meeting with both teams trailing AFC East leader Buffalo (10-3). The Patriots will finish with fewer victories than a division rival for the first time since Bill Belichick’s first season in New England in 2000, and a loss Sunday would eliminate them from playoff contention.

“All I know is if we go out there and we win the rest of our games, we give ourselves a chance,” Patriots running back James White said. “And then whatever else happens, it’s not really in our control.”

One more loss ensures that for the first time since 2000 — the year the Patriots drafted Brady — they won’t finish above .500.

Patriots cornerback Stephon Gilmore was the NFL Defensive Player of the Year in 2019, and Dolphins cornerback Xavien Howard is making a strong bid to succeed him.

Howard leads the NFL with nine interceptions, the most in a season since 2012, and is tied for first in the league with 17 passes defended. Teams continue to throw his way: Howard has an interception in each of the past five games.

“You would think people would learn,” teammate Christian Wilkins said.

Miami's defense is much improved since Week 1, when it allowed 217 yards rushing in a loss at New England. The Dolphins rank second in the NFL in points allowed, and are tied for the league lead with 25 takeaways. Their streak of at least one takeaway in 19 consecutive games is the longest in the NFL.

“They’ve been very opportunistic,” Belichick said. “They’ve forced offenses into some bad plays and capitalized on them.”

Whatever struggles the Patriots have had on offense this season, Cam Newton maintains they aren’t the fault of offensive coordinator Josh McDaniels.

Asked during his weekly radio appearance if play-calling in the red zone had any effect on the offense going 0 for 4 in last week’s loss to the Rams, the quarterback rose to his coach’s defense.

“He’s a very passionate person that I would never second-guess his theory no matter what it is,” Newton said. “There have been times where, as a player, you kind of bail your coach out because of the plays that you may make. But more times than not, Josh has bailed the whole team out because of his theory and his in-game adjustments. So, it’s give-and-take.”

Through 13 games, New England is ranked 27th in the NFL in the red zone, scoring a touchdown on 52% of its opportunities.

Olszewski had a 70-yard punt return for a touchdown in Week 13 against the Chargers.

Should the Patriots take Tagovailoa seriously as a receiving threat? He ran into the flat as the intended receiver on a trick play last week after handing off to wideout Lynn Bowden Jr., who decided to run instead.

“Tua has good hands,” Dolphins receivers coach Josh Grizzard said. “He’s a card dealer back there when he gets it from center, so I’m sure he can catch the passes well.”