Rams have built a dominant defense midway through season 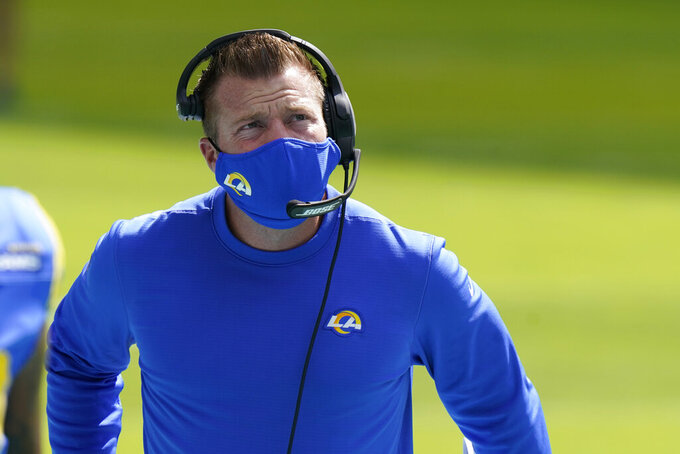 Los Angeles Rams head coach Sean McVay looks up at the scoreboard during the first half of an NFL football game against the Miami Dolphins, Sunday, Nov. 1, 2020, in Miami Gardens, Fla. (AP Photo/Lynne Sladky)

THOUSAND OAKS, Calif. (AP) — Sean McVay’s offseason decision to ditch Wade Phillips in favor of a 37-year-old career assistant who had never been an NFL defensive coordinator seemed quite capable of burning the Los Angeles Rams with hubris.

Instead, Brandon Staley has made an already good defense great through the first half of the season, keeping the Rams (5-3) in NFC West contention despite inconsistency from McVay's offense all year long.

“They’ve definitely played at a really high level,” McVay said of his defense. “I think we’re really getting very comfortable with some of the nuances and the newer things that we’re doing. You’re really starting to see some of our players shine, and they’ve done an excellent job. I’ve been very pleased with them.”

McVay had ample reason to be thrilled with the growth of Staley's defense as the Rams headed into their bye week with much bigger challenges ahead.

Four years after he was working at Division III John Carroll University, Staley is running the stingiest defense in the NFL judged by yards. While it hasn't been perfect, particularly in two of the Rams' losses, it's tough to imagine a rookie coordinator getting more out of an ostensibly depleted talent group built around superstars Aaron Donald and Jalen Ramsey.

The Rams are allowing a league-low 291.9 yards per game and 4.7 yards per play, while only one team has allowed opponents to convert fewer third downs (33.3%). Los Angeles is tied for third in the league with 19 points allowed per game, just a fraction behind the league leaders.

Los Angeles has allowed the fourth-fewest yards rushing (94.8) and the second-fewest yards passing (197.1). Opponents have gained an NFL-low 5.2 net yards per pass attempt, a stat boosted by the Rams’ 25 sacks, fourth in the league.

The Rams went into their break last weekend by holding Miami to 145 yards and 10 offensive points, thoroughly shutting down the Dolphins in Tua Tagovailoa's heralded debut game. The performance was just the latest in a trend for the Rams, who have held five consecutive opponents without an offensive touchdown in the second half while clamping down all over the field.

There are several reasons for the defense's success, but the biggest appear to be flexibility, smarts, and Staley's ability to make good halftime adjustments.

“I think we’ve executed at a high level coming out in the second half,” Staley said. “I think that we’ve got a group of players that is very confident in one another. They know that it’s a long game.”

That group didn't appear to be as impressive this year, but those presumptions have been quite wrong. Los Angeles lost several key contributors in the offseason — including leading tackler Cory Littleton, edge rusher extraordinaire Dante Fowler, nickel back Nickell Robey-Coleman, and veteran safety Eric Weddle — and replaced only Fowler from outside the organization by signing Leonard Floyd, who has four sacks.

“We've got a good group of guys who are committed to learning and improving, and we know there’s a lot of things we can get better at,” defensive tackle Michael Brockers said. “Moving forward, it’s just all about preparing and getting better each day.”

The defense will get another boost after the break when run-stopping defensive tackle A’Shawn Robinson makes his debut. Robinson missed training camp and nearly sat out the season with an undisclosed medical condition after signing a two-year, $17 million deal with the Rams in the offseason.

One potential caveat in the Rams' defensive success is the fact they've played four games against the NFC East, the league's worst division. Still, Los Angeles also shut down Chicago and Miami while making strong adjustments to slow down Buffalo and San Francisco late in eventual losses.

Nine of the Rams' sacks are the responsibility of Donald, who shares the NFL lead with Cleveland's Myles Garrett. Donald is the two-time AP NFL Defensive Player of the Year, and he's on track for a third award with his destructive season on the Los Angeles line.

“He could win it every year, in my opinion," Ramsey said. "It’s starting to get to the point where everyone knows he’s the best, so no matter how great he does, people sometimes don’t look at it as, ‘Wow, that’s amazing’ because they’re getting used to it.

“It’s kind of like what happens to basketball players sometimes, what happened to Kobe and LeBron,” Ramsey said. "What happens to LeBron all the time, he’s the best player and Most Valuable Player a lot of the time, but it’s kind of expected, so it isn’t glorified as much as it should be, in my opinion. But AD should probably be Defensive Player of the Year every year.”