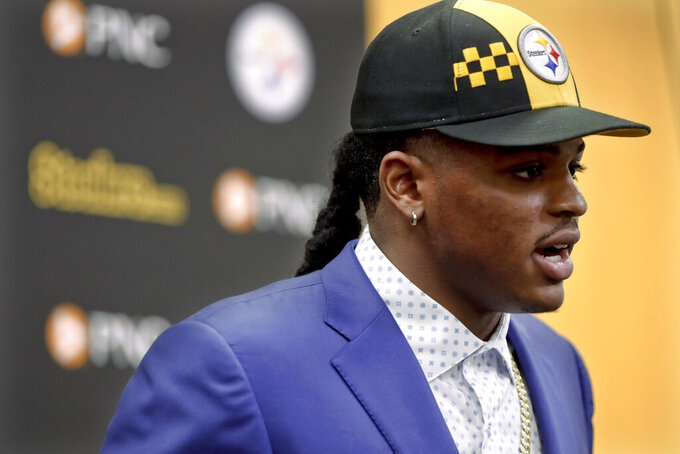 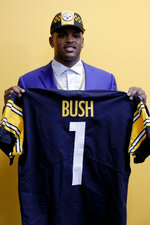 PITTSBURGH (AP) — Pittsburgh Steelers coach Mike Tomlin increasingly talks about "position-less" football and the ever growing need to find players who can't just do one thing, but many.

Ryan Shazier might have been the embodiment of that movement until a spinal injury suffered in December 2017 halted the star linebacker's career just as it was ascending.

After waiting a season turning to experienced players while trying to fill a void that is in many ways unfillable, the Steelers didn't sit on their hands hoping Michigan's Devin Bush would fall to them with the 20th overall. They attacked.

The aggressive and decidedly un-Steelerlike choice to move up 10 spots in a trade with Denver to make sure they landed the do-everything Bush is a testament to both the organization's belief in his talent and the team's very pressing need to find a difference-maker next to inside linebacker Vince Williams.

"If he helps us win a Super Bowl then it was a good pick," Steelers general manager Kevin Colbert said. "Does he have the capabilities? We believe so. He can play the run. He can cover. He can rush the passer. He'll be a special teams contributor. He's an awesome kid and has great football intelligence. ... Where it goes, we'll see."

Whether Pittsburgh's 2019 draft will eventually be viewed as a success or a failure depends on it.

The previous time the Steelers traded up in the first round was in 2003 when they jumped 11 slots to snag safety Troy Polamalu, a move that helped pave the way to three Super Bowl appearances (two victories) and will likely end with Polamalu in the Hall of Fame. It's far too early to put Bush in such company, but his arrival should give the defense a serious jolt of athleticism and swagger.

"Trading up 10 spots is obviously never heard and they haven't done it in a while or are really not used to doing it," Bush said. "Just to be able to do that, it really shows a lot of what they think about me and what they want me to do for this organization."

Pittsburgh split its remaining eight picks between offense and defense, addressing the departure of All-Pro wide receiver Antonio Brown and three-time Pro Bowl running back Le'Veon Bell while also providing the secondary with a dash of size and finding some depth at tight end and along the defensive line.

A flurry of late-round picks focused on players who can fit in at multiple positions will help provide depth, even if the players selected never play a down of meaningful football, in Pittsburgh anyway.

"You need to provide as many avenues as you can for those guys to make your team, or impact your team," Tomlin said.

Bush will get most of the attention because he figures to get mixed in almost immediately with Williams and veteran Mark Barron — who signed as a free agent — after the Steelers cut linebacker Jon Bostic on Saturday shortly after the draft ended.

Wide receiver Diontae Johnson out of Toledo shares a ton of similarities with Brown, while 6-foot-2 cornerback Justin Layne could provide a physical presence on the outside. Kentucky running back Benny Snell Jr. was relentlessly productive for the Wildcats and joins a group that includes James Conner and Jaylen Samuels. Tight end Zach Gentry from Michigan provides some depth after Jesse James left for the Detroit Lions.

The Steelers took a pair of linebackers (Sutton Smith and Ulysees Gilbert III) in the sixth round sandwiched between mammoth Alabama defensive end Isaiah Buggs. Offensive lineman Derwin Gray gives Pittsburgh a big body to throw in the mix after veteran Marcus Gilbert was traded to Arizona.

The Steelers don't do bold often. Jumping up to grab Bush was a bit out of character but a move the team needed to make. While Shazier continues to make inspirational progress, it's uncertain at best if he'll ever play again. Drafting Bush was an important step toward moving on.

While Colbert talks about not drafting for "need" it's kind of tough to look at the top four picks and not draw a straight line to positions where the team needed impactful guys. Johnson can line up all over the field and return kicks (much in the way Brown did when he arrived as a sixth-round choice in 2010). Layne will join a secondary that picked off just five passes last season. Snell's workhorse mentality will help the Steelers find spots to rest Conner, who wore down late in the year.

The Steelers chose to go all in on quarterback Ben Roethlisberger when they signed the 37-year-old to an extension that runs through the 2021 season. The window to win another Super Bowl during Roethlisberger's highly successful tenure is open but will require Bush and Johnson to learn quickly.

If Layne can force his way onto the field, too, that will only help a defense that had no trouble getting to the quarterback but struggled to produce turnovers.