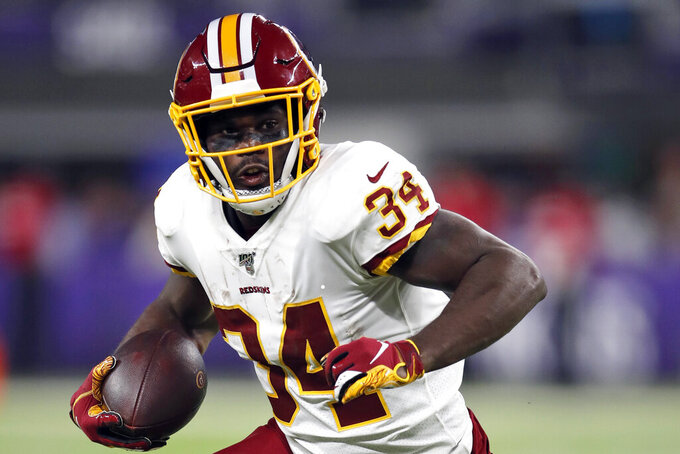 FILE - In this Oct. 24, 2019, file photo, Washington Redskins running back Wendell Smallwood (34) runs the ball against the Minnesota Vikings during an NFL football game in Minneapolis. The Pittsburgh Steelers have signed Smallwood to a one-year deal, giving the backfield a bit of experienced depth heading into training camp. (Jeff Haynes/AP Images for Panini, File)

PITTSBURGH (AP) — The Pittsburgh Steelers have signed running back Wendell Smallwood to a one-year deal, giving the backfield a bit of experienced depth heading into training camp.

The 26-year-old Smallwood played for Philadelphia for 2016-18 after being taken in the fifth round of the 2016 draft out of West Virginia. His rookie season included running for 79 yards and a touchdown against the Steelers. His rushing total in that game remains a career high.

Smallwood spent 2019 in Washington, running for 81 yards as a reserve. An able pass catcher, he gives Pittsburgh more versatility out of the backfield.

The Steelers are in the midst of a possible transition at running back. Conner is entering the final year of his contract. Snell showed promise as a rookie. Samuels is considered more of an H-back and McFarland figures to be a bit of a project after serving as a role player at Maryland.