2nd-year QB Mac Jones leaving something behind this year 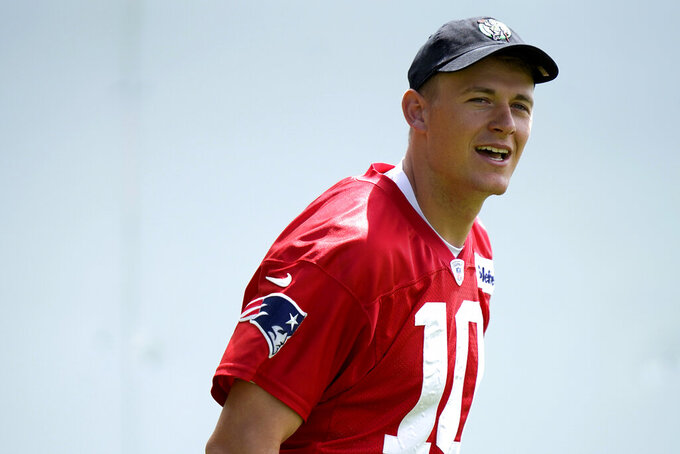 Bourne noted that Jones is lacking something he brought with him when he arrived in New England as a first-round draft pick out of Alabama last year.

“When you’re a rookie, you just don’t know it until you go through it for a year. So he’s definitely a lot more in shape than he ever was. He’s just dominating in conditioning, and it’s just dope to see. So he’ll just be able to endure more in a game and go through more.”

According to Jones, conditioning is an area he’s prioritized following a rookie season that saw him throw for 3,801 yards and 22 touchdowns (with 13 interceptions) while leading his team to 10 regular-season wins and a playoff berth.

“I think every year you want to do like a self-evaluation: How you felt through the games and body fat, all that stuff,” said Jones. “For me, just clean up my diet, and I’ve learned more this offseason than I probably ever have about nutrition, sleep, wellness, all that stuff.”

Jones said that he’s focused on “eating healthy, taking out a lot of things that are bad for my diet, but at the same time I need to maintain my weight and be able to take hits, so there’s a fine balance for every player. Every player’s different and, for me, I’ve definitely trimmed down body fat a little bit, and I’ll get a chance to bulk back up before the season starts and be able to absorb the hits.”

While Jones may be sporting a bit of a new look, he’ll be quarterbacking an offense that has a new look as well. Josh McDaniels, the Patriots’ longtime offensive coordinator and quarterbacks coach, is gone to become head coach of the Las Vegas Raiders.

While the team has yet to announce another offensive coordinator, at different times on Monday head coach Bill Belichick, Joe Judge and Matt Patricia appeared to be in charge of the offense.

Jones said the fact the team has yet to announce an offensive coordinator is of no concern to him.

“It’s not my decision to make and we have plenty of time for all that, so right now it’s about the guys and I getting on the same page,“ he said. ”Running backs, tight ends, receivers, and then working with the offensive line doing some things with them just to make sure we’re all on the same page.

“So it always goes back to the players, and we’re excited to grow together and learn from whoever’s coaching us.”

Jones said he is pleased with a pass-catching corps that’s added wide receivers DeVante Parker (acquired in a trade with the Miami Dolphins) and Tyquan Thornton (a second-round draft pick out of Baylor) this season.

“I’m really happy with the group we have,” said Jones. “I got a chance to work with all of them in the offseason at various locations and here and all that, so I’m very pleased with everybody, and we have a tight group once again. DeVante’s done a great job coming in and working in a new system. He has some familiarity with the Dolphins and all that, but we’re happy to have him and anybody that can contribute to our team ... So it’s a good group, and we just have to keep elevating each other and push each other and compete.”