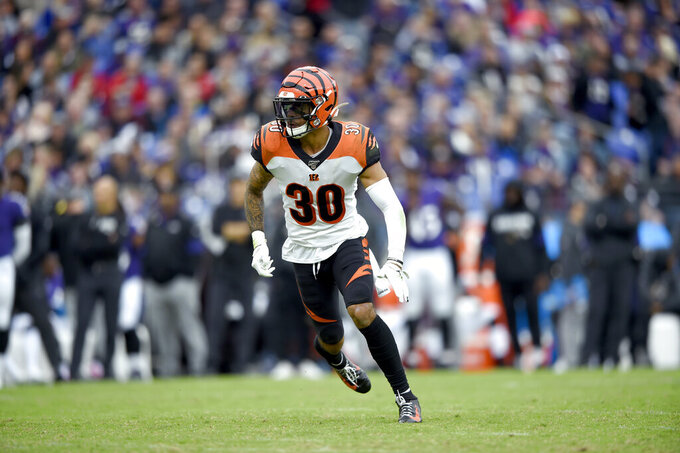 Cincinnati Bengals free safety Jessie Bates runs while defending against the Baltimore Ravens during the second half of a NFL football game Sunday, Oct. 13, 2019, in Baltimore. (AP Photo/Gail Burton)

BALTIMORE (AP) — The Cincinnati Bengals can't stop the run, score touchdowns when they reach the red zone or catch one of those timely breaks that can turn the tide on the most frustrating of seasons.

First-year coach Zac Taylor is simultaneously trying to fix his team's many problems while looking forward to the day when the Bengals (0-6) finally erase the zero that has taken up residence in the win column.

On Sunday, the Bengals raced to a 7-0 lead on a 92-yard kickoff return by Brandon Wilson before permitting the Baltimore Ravens to score on their first three possessions. Though Cincinnati stiffened after that, the damage had been done in a 23-17 defeat.

Yes, Ravens quarterback Lamar Jackson ran for 152 yards and threw for 236. Sure, Baltimore amassed 497 yards — including 269 on the ground.

What matters to Taylor, besides the final score, is that the Ravens managed only six points over the final 44 minutes.

"I don't care what the stats say, they buckled down," Taylor said of his defense. "They gave up two field goals there the remainder of the game. That's what we needed from them. That's the response we needed. That's not a normal response from a team that's 0-5 at the time."

A defiant Taylor deflected questions about whether he should give up play-calling duties and focus on the bigger picture to turn his struggling team around.

"We've won zero games and have not scored enough points. That 100 percent falls on me," he acknowledged. "But I do like the communication we have as a staff. We're on the same page when the calls come out, regardless of who calls it."

Taylor pointed to the way the Bengals performed on the road against the AFC North leaders as a reason for hope rather than frustration.

"You can throw every stat at me you want — we're not scoring points, we're not scoring touchdowns, our red zone efficiency is terrible — but the bottom line is we're 0-6 and our team's got more fight than anybody I've been around," he insisted. "I just told them: When we do find that way, it's going to be the most rewarding win you've ever had in your entire life."

The Bengals didn't make things easy on themselves Sunday, allowing the Ravens to roll up a 212-6 edge in offensive yards and an 11-0 advantage in first downs in the first 15 minutes.

But after quarterback Andy Dalton scored from the 2 with 1:28 left, Cincinnati lined up for the onside kick with the hope of pulling out a victory.

"We've got some great guys here, we've got guys that are sticking together," Dalton said. "For us to get things turned around, it has to be that way."

What's also important is getting off to a faster start. For three straight games now, the Bengals have failed to score an offensive touchdown over the first three quarters. That's how a 7-0 lead becomes a 20-10 deficit with 15 minutes left.

"We've got to be better in the first half," Taylor said. "We have to put points on the board and take the pressure off the defense."

Next week, the Bengals host Jacksonville in their quest to get their first win under Taylor.

"There's not one person in this locker room who has quit on us," Taylor said. "The mood is still (ticked) off that we haven't found a way to the win, but everyone still believes."

As a youth, Bengals linebacker Preston Brown watched many a Cincinnati team struggle from start to finish. He can only hope this isn't one of those clubs.

"I grew up seeing 2-14 teams, and it's something I never wanted to be a part of," he said. "I'm trying each and every week to get that first win. We know what the whole city wants, and we've got to get this win."