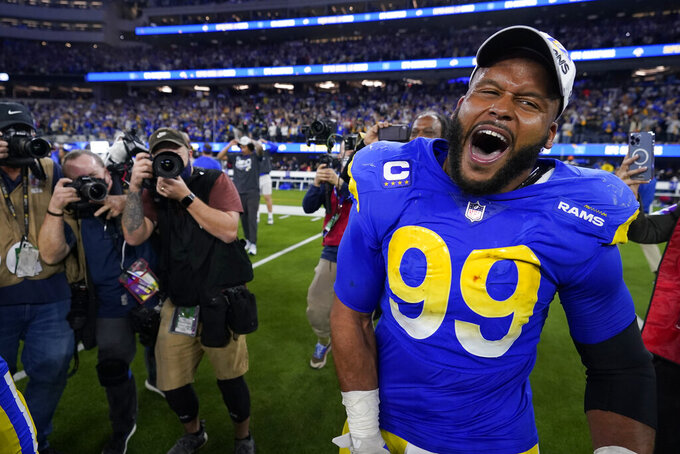 RAMS PLAYER TO WATCH: DT Aaron Donald. The game's most dominant defensive player over the last eight seasons gets another chance to shine on the big stage. Donald has 1 1/2 sacks and 16 pressures in three games this postseason but was unable to make a big impact in his first Super Bowl appearance three years ago. The 2021 unanimous All-Pro should have a better opportunity against an overmatched interior offensive line.

BENGALS PLAYER TO WATCH: QB Joe Burrow. Burrow has gone from No. 1 overall pick to starting QB in the Super Bowl faster than anyone else by getting here in his second season. Burrow's presence has transformed a struggling franchise. Burrow has 15 TD passes and just two INTs in his last seven games, while averaging 331.1 yards passing per game.

KEY MATCHUP: Rams CB Jalen Ramsey vs. Bengals WR Ja'Marr Chase. The NFL's top cornerback faces off against the most productive rookie receiver since the merger in a matchup that could determine the winner. Ramsey made his third All-Pro team after intercepting four passes and having 16 passes defensed. Chase's 1,455 yards receiving in the regular season were the most for a rookie in the Super Bowl era and his seven receptions of at least 50 yards in the regular season and playoffs are tied for second most for any player in the past 30 seasons.

KEY INJURIES: Rams TE Tyler Higbee (knee) and T Joseph Noteboom (chest) were placed on IR and will miss the game. ... Los Angeles RB Darrell Henderson (knee) and DL Sebastian Joseph-Day (pectoral) were activated off IR and are expected to play. ... Bengals TE C.J. Uzomah said he expects to play after leaving the AFC title game early with a knee injury. He is listed as questionable.

SERIES NOTES: The teams met once under the current coaches with the Rams winning 24-10 at Wembley Stadium in London in 2019. ... Cincinnati coach Zac Taylor spent two seasons on Sean McVay's staff on the Rams. ... Rams LT Andrew Whitworth spent his first 11 seasons with the Bengals and his 168 games for Cincinnati are 14th most in franchise history.

STATS AND STUFF: The Rams are 1-3 all-time in Super Bowls, while the Bengals have lost their only two trips. ... This is the youngest coaching matchup in Super Bowl history and the first time both coaches were younger than 40. ... Burrow and Rams QB Matthew Stafford will be the 10th and 11th QBs to start a Super Bowl after being drafted first overall, Stafford in 2009, Burrow in 2020. ... This is the second matchup of two former No. 1 pick quarterbacks, with Peyton Manning beating Cam Newton six years ago in the other. ... The winner of this game will be the seventh No. 1 pick QB to start for the winning team in the Super Bowl. ... Stafford’s 49,995 yards passing and 323 TD passes are the most for a QB making his first Super Bowl appearance. Stafford needs 209 yards passing to become the sixth player to reach 6,000 in a single season. ... Rams WR Cooper Kupp has 2,333 yards receiving in the regular season and playoffs, the most in a season in NFL history. ... Kupp's 20 TD catches are tied for fourth most behind only Randy Moss (24 in 2007) and Jerry Rice (22 in in 1987 and 1989). Kupp's 13 100-yard receiving games are the most in a season. ... The Rams were third in the NFL with 50 sacks in the regular season. ... The Bengals are the fourth team in NFL history to make it to the Super Bowl a year after winning four or fewer games. The 1999 Rams are the only one of those teams to win it. ... Burrow is the first QB to make the Super Bowl after getting sacked the most times in the regular season. His 63 sacks in the regular season and playoffs are tied for eighth most in a season in NFL history. ... Bengals rookie K Evan McPherson has gone 4 for 4 on field goals in all three playoff games, tying Adam Vinatieri for the most career playoff games with at least four made field goals. McPherson’s 12 makes so far this postseason are two shy of Vinatieri’s single-year record set in the 2006 season. ... The Bengals scored in the final two minutes of the first half in all three playoff games, giving them a league-high 74 points in those situations this season — fourth best since 2000. ... Cincinnati was penalized the second fewest times (72) for the fewest yards (620) in the regular season.