Big-time agent has plan for football players to find path 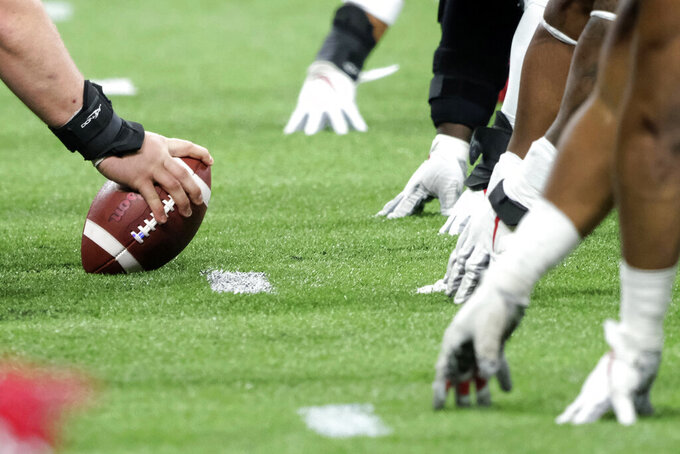 FILE - In this Dec. 7, 2019, file photo, a player prepares to hike the ball at the line of scrimmage during the first half of the Big Ten championship NCAA college football game between Ohio State and Wisconsin in Indianapolis. Don Yee, one of sports' most influential agents, Tom Brady is one of his clients, has teamed with former ESPN and NFL Network executive Jamie Hemann to develop HUB Football. The concept is simple, though the implementation could be very complex: It will provide opportunities for college players and street free agents to be seen in action by NFL teams. (AP Photo/AJ Mast, File)

In this time of upheaval on all levels of football, Don Yee has a plan to provide long-term stability.

One of sports' most influential agents — Tom Brady is one of his clients — Yee has teamed with former ESPN and NFL Network executive Jamie Hemann to develop HUB Football. The concept is simple, though the implementation could be very complex: It will provide opportunities for college players and street free agents to be seen in action by NFL teams.

HUB, based in Southern California, will do so through tryout camps, then in games beginning next June. Yee's group already conducted two camps last fall, with just under 40% of the participants signing pro contracts.

“We hope we can help the product quality at the professional football level. That is our aim, and we want to give players and their families a new tool to use to curate their own professional and developmental path,” Yee says. "They’ve been powerless for too long.

“A lot of innovation is going to happen in the football industry, and HUB is just one example.”

People throughout pro football recognize the need for more developmental tools, and the coronavirus pandemic has and will continue to exacerbate those needs. With such upstarts as the Alliance of American Football and the XFL failing, Arena Football basically disappearing, and the CFL barely an outlet for finding NFL talent, HUB could fill some of the gaps.

More gaps could be on the horizon, too. There might not be much (if any) college football this season. Some collegians could opt out of playing.

Evaluating street free agents — a player with no contract anywhere — is a time-consuming, costly and usually rushed process

“We already have commitments from multiple NFL teams to HUB, as clients, and we expect many more," Yee says without identifying those franchises. "We still are determining whether we will limit the product, however, to a certain number of teams in the league.”

HUB's plans include a one-day, invitation-only training camp of noncontact football drills designed to teach. Between 20 and 25 players would attend each camp, with COVID-19 protocols in place. The first camp is tentatively planned for September, subject to local health laws and regulations.

NFL teams would be able to attend one site to evaluate the players more extensively than currently possible.

The games will be designed to supplement the college supply chain and customized to what NFL college scouts and personnel executives seek. There will be two games each next June and July for any player on the verge of being drafted in 2022, and possibly even for some who may not be eligible until the 2023 or 2024 drafts.

HUB will conduct those invitation-only games similarly to the Senior Bowl, featuring a week of NFL-style meetings, practices, interviews — culminating with a game featuring rules changes such as no blitzing, man-to-man defense, and others for player safety.

Because those players will not be paid, they might be able to keep their college eligibility. The idea is to provide deeper evaluations of their skill sets.

Yee also envisions other value for a player, suggesting he might have starred as a freshman or sophomore and then could choose to skip his junior season, but play in the HUB's games while focusing on academics in the fall, and on conditioning for the next NFL scouting combine.

Perhaps he played another sport — several NFL tight ends were basketball power forwards, for example. Or he was a backup to a star player and rarely was able to exhibit his talents in college.

Yee has been considering staging a game in December for those players whose schools have canceled or postponed their seasons. Only those with pro potential would be invited.

Other developmental aspects he believes HUB can provide: promising coaching candidates become head coaches for the week of the games; minority and women staffers could be placed in other positions to get reps in leadership roles.

“HUB aims to be the solution customized to the needs of NFL teams, elite players, and their agents," Yee says. "Right now, no product like this exists in the marketplace, which is unusual. It’s the right time for innovation in professional football.”