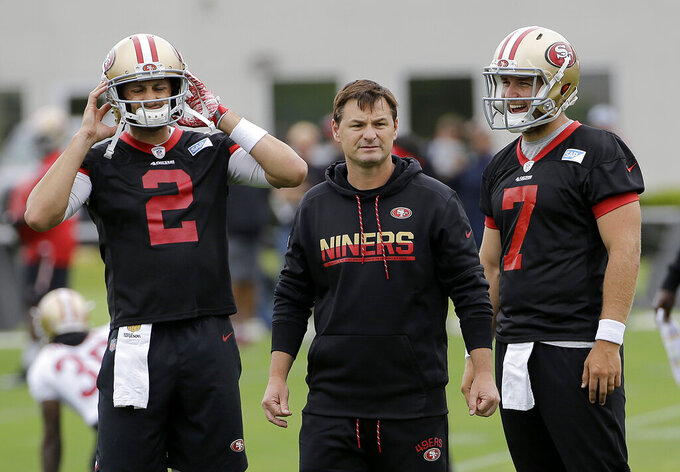 "We're getting an experienced coach who was a trusted and valued assistant with Kyle Shanahan for three seasons," Broncos head coach Vic Fangio said. "... With his background and knowledge, it's the perfect time for Rich to be an offensive coordinator in the NFL. I find this opportunity for Rich very similar to when I first became a defensive coordinator many years ago, and he is ready to take this step in his career."

General manager John Elway declared recently that the Broncos need to catch up with teams around the NFL who are all-in on the run-pass option and other innovative concepts seeping into the NFL from college football's heavy reliance on spread offenses.

Fangio homed in on Scangarello (scain-guh-REL-oh) after rebuffing Gary Kubiak , the ex-Broncos head coach who wanted to return to running Denver's offense after spending a year as a senior personnel assistant for Elway.

Kubiak, who stepped down after the 2016 season, citing health concerns, instead joined the Minnesota Vikings' staff this week.

Scangarello, 46, is a 24-year coaching veteran with four years of NFL experience, including three with Shanahan. He was instrumental in the development of four quarterbacks in San Francisco, starting with Brian Hoyer and C.J. Beathard in 2017. He helped Jimmy Garoppolo adjust after a midseason trade from New England that season, and Garoppolo won his first five starts.

After injuries to Garoppolo and Beathard last season, Scangarello helped undrafted free agent Nick Mullens go from third-stringer to starter. In eight games, Mullens averaged 285 yards passing and completed 64 percent of his passes. He led the 49ers to a win over Denver in December .

The Broncos have been unstable at quarterback ever since Peyton Manning's retirement following their Super Bowl win three years ago.

Case Keenum has a year left on his two-year, $36 million contract, although Elway recently said he viewed Keenum as a short-term fix as he continues searching for a long-term answer.

Asked for his play at QB at his introductory news conference last week, Fangio said, "Right now, Case Keenum is our quarterback." He added that he's seen Keenum at his best — when he was leading the Vikings to the NFC championship a year ago — so, "I know what he's capable of and we're going to try to get that out of him."

With Keenum setting career highs in interceptions (15) and sacks (34) and an injury epidemic on offense, the Broncos sputtered in 2018. They ranked toward the bottom of the league in most offensive categories, including 23rd in scoring (19.7) and 28th in third down conversions (33 percent) as they relied on a youth movement that included running back Phillip Lindsay, the first undrafted offensive player ever to earn a Pro Bowl selection.

Under offensive coordinator Bill Musgrave, the Broncos built a bad habit of starting slowly. They punted on their opening possession in each of their final nine games and only scored two touchdowns in 34 first-half drives over their final five games.