Colts look to get ground game up and running following bye 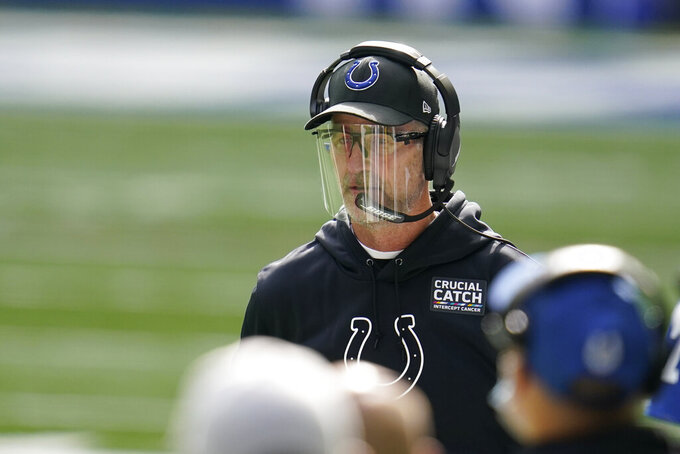 He calls running plays early and often to set the tone. He uses them late to chew up the clock. And in between, he stays on the ground to keep defenses honest. It doesn't hurt that he also has some proven horses to rely on.

A year ago, the Colts had a top-10 ground game. This bye week, they're trying to solve the mystery of how they've slipped to 26th in yards rushing per game and 31st in yards per carry.

“I don’t think the gap is huge. We’re definitely not where we want to be," longtime left tackle Anthony Castonzo said. “Hopefully, being able to reflect and not having to worry about a game plan, but really being able to focus on the technique type things is going to make a difference for us."

There are plenty of explanations for why the Colts (4-2) haven't been running at full throttle.

Indy lost starting running back Marlon Mack with a season-ending torn Achilles tendon in the first half of the season opener. Castonzo sat out at Cleveland with a rib injury and Indy's top three tight ends — Jack Doyle, Trey Burton and Mo Alie-Cox — all have missed time with injuries.

Indy's receiving corps has taken some hits, too. Starter Parris Campbell went down with a left knee injury in Week 2 and hasn't returned. Rookie receiver Michael Pittman Jr., the Colts' top draft pick, hasn't played since Week 3 after being diagnosed with leg compartment syndrome. Campbell and Pittman both needed surgery.

Still, Reich's roster is deeper this year than it's been either of his previous two seasons in Indy.

And while backup Nyheim Hines has been more proficient out of the backfield as a receiver, running back Jonathan Taylor is among the NFL's top rookies in total yards (529) even as he gets acclimated to his new role.

“That’s always a part of it, kind of him understanding us and us understanding him," Castonzo said. “Where does he like to cut on this play? What is he most comfortable with? But at the end of the day, you have to block the guys you’re assigned to block and he has to find the holes he’s assigned to find. If everybody just does their job, the running game works."

The Colts also struggled to stretch the field most of the first six games because quarterback Philip Rivers has relied primarily on short, quick throws. Opponents, like the Cincinnati Bengals, responded by frequently stacking nine or 10 players within 5 yards of the line of scrimmage.

Sunday's game might have provided a blueprint for how to beat those defenses. Rivers rallied the Colts from a 21-point deficit by throwing for 371 yards and three TDs, including nine completions of 20 yards or more.

If Rivers keeps it up, the backs could find more open space in those running lanes.

“It did help," Reich said. “You make a couple of those plays and it does loosen them up a little bit not only for the underneath stuff, but for the run game a little bit as well."

He acknowledges there have been times he simply didn't call enough runs, and when he did the emphasis was on burning clock rather than churning out big gainers. Instead, he believes the Colts have been efficient on the ground and that Taylor has done a good job since becoming the workhorse back.

But everyone knows the Colts must find ways to improve in the red zone and on third-and-short. Indy has struggled in both, and if it wants to make it back to the playoffs, the Colts need their ground game up and running.

“It’s just a little technique thing here and there," Castonzo said. “We’re going to do a self-scout (this week) where we really look at a lot of the stuff that we’ve been doing throughout the year and what we need to change to make that next step."