Defense has been weak link in Cardinals rebuild 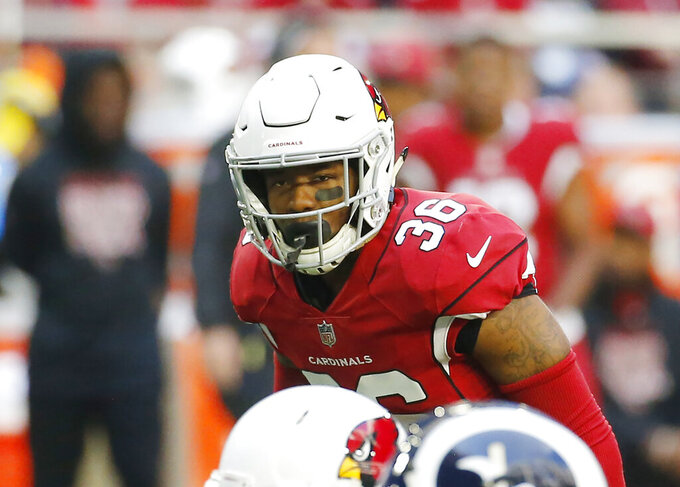 FILE - In this Sunday, Dec. 23, 2018 file photo, Arizona Cardinals strong safety Budda Baker (36) looks toward the quarterback during the first half of an NFL football game against the Los Angeles Rams in Glendale, Ariz. The Cardinals locker room was a jovial place on Tuesday, Nov. 19, 2019, with players rushing through their post-practice routine so they could embark on a five-day break away from football. Arizona safety Budda Baker hopes he and his defensive teammates have fun before coming back to the desert with better energy and focus. (AP Photo/Rick Scuteri, File)

TEMPE, Ariz. (AP) — The Cardinals locker room was a jovial place on Tuesday afternoon, with players rushing through their post-practice routine so they could embark on a five-day break away from football.

Arizona safety Budda Baker hopes he and his defensive teammates have fun before coming back to the desert with better energy and focus.

Because after 11 games there’s not many ways to spin it: The Cardinals’ defense has been bad.

“The numbers say it all: we’re like 31st in pass defense and twenty-something in run defense,” Baker said. “We’ve gotten a lot better in the run game, but we’re still like 26th on third downs. All those things we need to work on collectively, as a team.”

Baker’s numbers were slightly off — the Cardinals are actually dead last (32nd) in the NFL in passing defense — but his overall point was absolutely correct. The biggest reason Arizona (3-7-1) isn’t in the hunt for the playoffs is because of a porous defense that’s giving up nearly 30 points per game.

Arizona goes into its off week on a four-game losing streak, including a 36-26 setback to the San Francisco 49ers on Sunday. The Cardinals built an early 16-0 lead in the first half before losing it and then rallied for a 26-23 advantage in the fourth quarter before the 49ers came back again.

On the decisive rally, Cardinals linebacker Chandler Jones was burned in coverage for a 25-yard touchdown pass from quarterback Jimmy Garoppolo to Jeff Wilson Jr.

“It’s tough, but I will not use the word frustrating,” Jones said Sunday. “We’re not frustrated. We’ll be all right. We see our potential and what we need to do out there and that’s what hurts the most.”

The 6-foot-5, 265-pound Jones has been the Cardinals’ best defensive player all season, especially when it comes to pressuring quarterbacks. He leads the NFL with 12 1/2 sacks and has forced five fumbles.

But in that crucial moment against the 49ers, he was in coverage instead of doing what he does best. That led to some heat for defensive coordinator Vance Joseph, but coach Kliff Kingsbury said there hasn’t been any discussions about changing defensive leadership.

The 40-year-old Kingsbury was hired for his offensive acumen and for the most part he’s delivered. He doesn’t pretend to be a defensive expert even if he says he’s paying attention.

“I’m always involved. I’m just not calling it on game day,” Kingsbury said. “I’m calling offensive plays, but we have discussions daily on defense and defensive personnel and where we want this to be. Everybody understands the expectation, and we’re not there right now.”

Outside of the Cardinals’ coaching, there’s the question of talent.

Jones is having another great year, but the rest of the defense has been spotty, especially in the secondary.

Star cornerback Patrick Peterson missed the first six games of the season because of a suspension and hasn’t looked the same since his return. The Cardinals are relying on three rookies in the secondary, including cornerback Byron Murphy and safeties Deionte Thompson and Jalen Thompson.

All three have shown promise, but they’ve been inconsistent.

“It’s a work in progress,” Kingsbury said. “Obviously, we need to get better. There are some young guys out there who are going through it, thrown in the fire, and we’ve got to get better.”

Arizona will have three straight home games when it returns against the Los Angeles Rams, Pittsburgh Steelers and Cleveland Browns. There have been a lot of good vibes around the franchise thanks to Kingsbury’s arrival and the good play of No. 1 overall pick Kyler Murray, who’s thrown for 2,703 yards, 14 touchdowns and just five interceptions.

But for the Cardinals to win on a consistent basis, the defense must be better.

If Kingsbury is frustrated by the lack of progress on defense, he hasn’t shown it. On Monday, he was asked if he had any coaching strategies or tricks to loosen up his team and shake the lengthy losing streak.

Maybe nothing that crazy. But at this point, it might not hurt.