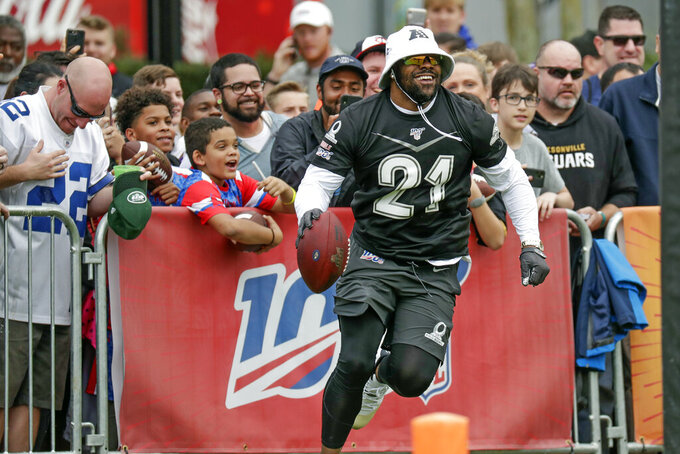 AFC running back Mark Ingram, of the Baltimore Ravens (21), runs back on the field after he jumped over the railing to have some fun with fans during a practice for the NFL Pro Bowl football game Thursday, Jan. 23, 2020, in Kissimmee, Fla. (AP Photo/John Raoux)

CHARLOTTE, N.C. (AP) — Ravens running back Mark Ingram praised the Panthers’ decision to give All-Pro Christian McCaffrey a $16 million-a-year contract and said he’d like to see other top young running backs paid, too.

Ingram called the 23-year-old McCaffrey an “impact player” and said he deserved the four-year, $64 million contract extension he received Monday after becoming only the third player in NFL history to amass 1,000 yards rushing and receiving in a season.

“Why should a running back be treated less than another position?" Ingram said in a video conference call on Tuesday. "All of these other positions get high (salaries). ... Why is the running back the redheaded stepchild? I think (McCaffrey) deserves that number.”

Ingram's comments come after some have been critical of Carolina's decision to give McCaffrey a record-setting deal after other high-profile running backs around the league have seen their production dip after receiving big contracts.

Some believe the shelf life of running backs is too short to invest big money.

Todd Gurley, for instance, received a four-year, $60 million extension from the Rams in 2018 after rushing for a career-best 1,305 yards and 13 touchdowns the previous season. But two years into the contract, the Rams cut ties with Gurley, who has struggled with knee issues. He has since signed a one-year deal with the Falcons.

David Johnson got a three-year, $39 million contract from the Cardinals prior to the 2018 season, but hasn't come close to matching his production in 2016 when he totaled 2,118 yards from scrimmage and 20 touchdowns. Arizona traded him earlier this offseason to the Texans.

And Le’Veon Bell received a four-year, $52.5 million deal from the Jets last offseason, then averaged a career-low 3.2 yards per carry and totaled just 789 yards rushing in 2019 with four total touchdowns in his first year in New York.

But some running backs have succeeded after getting big contract extensions.

Ezekiel Elliott showed no signs of slowing down last season, rushing for 1,357 yards and 12 touchdowns after the Cowboys gave him a $15 million-a-year contract which made him the highest-paid running in the league until McCaffrey's contract raised the bar.

Ingram is hoping that McCaffrey's deal will bode well for running backs such as Tennessee's Derrick Henry and New Orleans' Alvin Kamara, who are also up for new deals.

The Titans used the franchise tag on Henry this offseason, which will pay him $10.27 million in 2020. Kamara, like McCaffrey a few days ago, is entering the final season of his rookie contract.

“I think running backs deserve to get compensated for what they do — running the ball, catching the ball, and being able to block,” Ingram said.

“Running back is essential to the success of a team and I feel like we should be treated as such. I’m all for his deal. I’m excited for his deal and hopefully the running back market keeps increasing.”

According to Spotrac, the average yearly salary of a NFL quarterback is $6.4 million, more than three times the amount of a running back ($2 million). The only positions — offense or defense — that make less than the average running back in the NFL are tight ends and fullbacks.

But last week coach Matt Rhule said he viewed McCaffrey as the “centerpiece” to the offense, saying his versatility as a running back, receiver and returner makes him a rare commodity.

New Panthers offensive tackle Russell Okung admired McCaffrey from a distance last season while playing for the Chargers, and said he's excited to be on the same field with him when coronavirus restrictions are lifted.

“What a real talent,” Okung said. “I think it would be short-handed to only describe him as a running back. He's a playmaker and he makes plays all over the field. ... He's a bell cow. He's a workhorse. He's special — and that is the type of guy I like to be around."

Added Ingram: “His value on the team. His value across the league, his leadership... everything. I think he deserved that (contract)."