Jaguars QB Foles credits wife for his return to practice 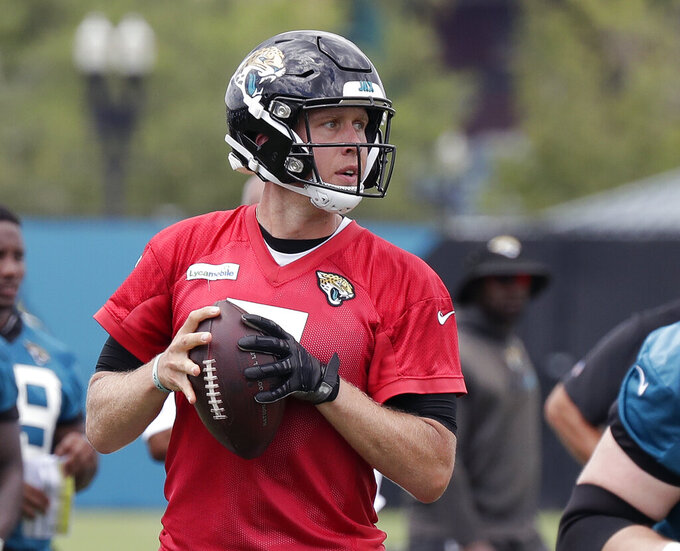 JACKSONVILLE, Fla. (AP) — Nick Foles walked off the practice field, paused briefly to take off his jersey and started sprinted to the locker room. He wanted to get home as quickly as possible.

Foles spent the last two days practicing with the Jacksonville Jaguars and trying to recover from a gut-wrenching personal loss.

Foles' wife, Tori, had a miscarriage last weekend. Foles spoke publicly for the first time following organized team activities Friday and said his wife urged him to return sooner than many expected.

"If my wife needed me at home right now, I'd be at home. That's just me being honest."

Tori Foles was 15 weeks pregnant with the couple's second child when she went into sudden labor Sunday and knew something was wrong. She later found out she had an infection of pneumonia in her blood that caused her to go into premature labor and endure a full delivery.

"I know there are a lot of people that go through this," Nick Foles said. "It's difficult. It's really difficult. It will always be emotional, but ultimately we trust the Lord in this process. We get home to our beautiful baby girl and we hug her even tighter. ... Tori's going through a lot right now. I'm here. The team's been awesome, but when I'm done here, get home to them so we can continue to heal with one another."

Foles raved about his wife's resilience. A volleyball player at Arizona, Tori Foles was out of college and working at Nike in 2013 when she was diagnosed with dysautonomia, which affects blood flow through the body and often causes lightheadedness, fainting, blurred vision and an increased heartbeat when standing up. There is no cure.

"She was bedridden, hospitals," he said. "She battles that every single day. Obviously, we've gone so much these last couple of years. We're going through this now. But she's so strong. She's unbelievable."

Tori returned home earlier this week and is taking antibiotics to fight the infection. She is getting help from family members and friends, which helped make it easier for Nick to leave the house, attend practices and continue installing the team's new offense.

"She's the one who said, 'Go, the team needs you right now,'" he said. "She knows I'm coming home right away. So that's her. It really is as simple as that. ... It's never going to be, 'Poor me' or anything. It's never that way. She goes through something every day with a chronic illness and she's never going to do that. She's tough. She fights through everything.

"Right now she's continuing to do what she can. She probably moves around too much right now. I know she's going through so many emotions, but that's something we get to go through, and in our relationship and our marriage. It allows us to grow closer and closer together."